Watch live and join the discussion as Damian Barr talks It’s A Sin with Russell T Davies and interviews Ruth Coker Burks about her book All The Young Men. 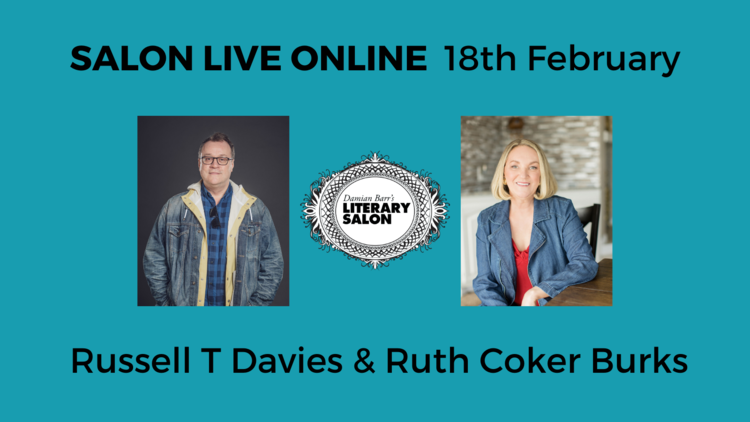 In the 1980s, HIV and AIDS devastated the LGBT community. But the epidemic is far from over.

Join us online at 8pm on Thursday 18 February for a powerful evening of fear and hope, loss and survival, becoming and belonging.

Storyteller Damian Barr will interview Ruth Coker Burks, author of All The Young Men, and Russell T Davies, creator of It’s A Sin, as they look back on that time, tell untold stories and reflect on their relevance now.

You'll be able to post questions and mingle in the chat before, during and after the main event.

If you can’t join us live on the night, you’ll be provided with a link to watch the Salon whenever you want within a few days of the event.

We caught up with Damian ahead of tonight’s Literary Salon.

The Literary Salon and what to expect

'We started the Literary Salon 12 years ago, now. In that time it’s grown and we’ve hosted shows all over the world and even world premieres. We now have a podcast and YouTube channel, but more importantly it’s become a community. It’s a place for readers and writers to meet and share ideas, and we’re proud to have created a space for people to talk and create real dialogue.

'We often focus on LGBT and untold stories, as well as pulling in the big names. Books and stories can change lives and I feel lucky to be trusted to create a space where people can talk passionately about the thing they love, and watch them flourish.

'We always wanted to go digital and broadcast quality events, and during lockdown we finally had the opportunity (silver linings!). The virtual Literary Salon still feels intimate and no barrier is felt. If anything, people seem to feel more able to ask questions and engage with the writers, as well as each other too. This give us much more opportunity for conversation and make connections.

'This evening I will be speaking to both Ruth and Russell separately, and then together, with a chance to ask questions between each. We will take a closer look at their processes, their stories, and exploring their experience of that time.

'We all have a shared history, and I think it’s a great opportunity for intergenerational healing. It feels particularly relevant in light of the Pandemic and it being LGBT history month. If anyone is coming for the first time, know it is a safe space with a real sense of community and likely to spark some incredible conversation.'

'Telling these stories is important. As a queer reader I wanted to give a platform to those voices, to show that we are on the same level and that our stories are just as valuable.

'We embrace inclusivity at the Literary Salon, and try to reflect this in our featured writers and you can often see this in our audience.'

Join Ruth, Russell and Damian online from 8pm-9.30pm (UK Time). This event will happen via YouTube so you won’t be seen on-screen and don’t have to worry about accidentally appearing in your pyjamas!

You’ll be able to post questions and mingle in the chat before, during and after with the chance to chat directly with Ruth, Russell and Damian.

Ruth Coker Burks is an advocate for the LGBT community who used her estate agent salary and took it on herself to be a caregiver for AIDS patients at a time when most turned their backs. She has been honoured as an Unsung Hero by the Human Rights Campaign, The World AIDS Museum in Fort Lauderdale, the Gay Men’s Chorus of Florida and the National AIDS Memorial. She currently resides in Northwest Arkansas.

Ruth says: ‘If I have one message with this book it’s that we all have to care for one another. Today, not just in 1986.’

Russell T Davies created and wrote Queer As Folk, Bob and Rose, The Second Coming, Cucumber and Years and Years. He adapted A Very English Scandal, revived Doctor Who and devised Torchwood.

Russell says: ‘I know I’m entering a body of work. There’s Angels In America and The Normal Heart, which was a scream of rage, and of course more recently Pose. I was steering between appreciating all those other things and finding my own way to do this.’

Damian Barr's super-power is stories: telling, sharing and celebrating them. An award-winning writer and journalist and in-demand interviewer and host, Damian has talked songwriting with Dolly Parton, surviving with Rose McGowan and the politics of empathy with Nicola Sturgeon.

He's a regular on BBC Radio 4 and major festivals like Edinburgh and Cheltenham, and the creator and host of The Big Scottish Book Club on BBC Scotland and iPlayer.

Thank you to our wonderful supporters Lovelies.help – and how you can turn unwanted items into cash donations!
END_OF_DOCUMENT_TOKEN_TO_BE_REPLACED
Image
Image

Support us with these It's A Sin-inspired products