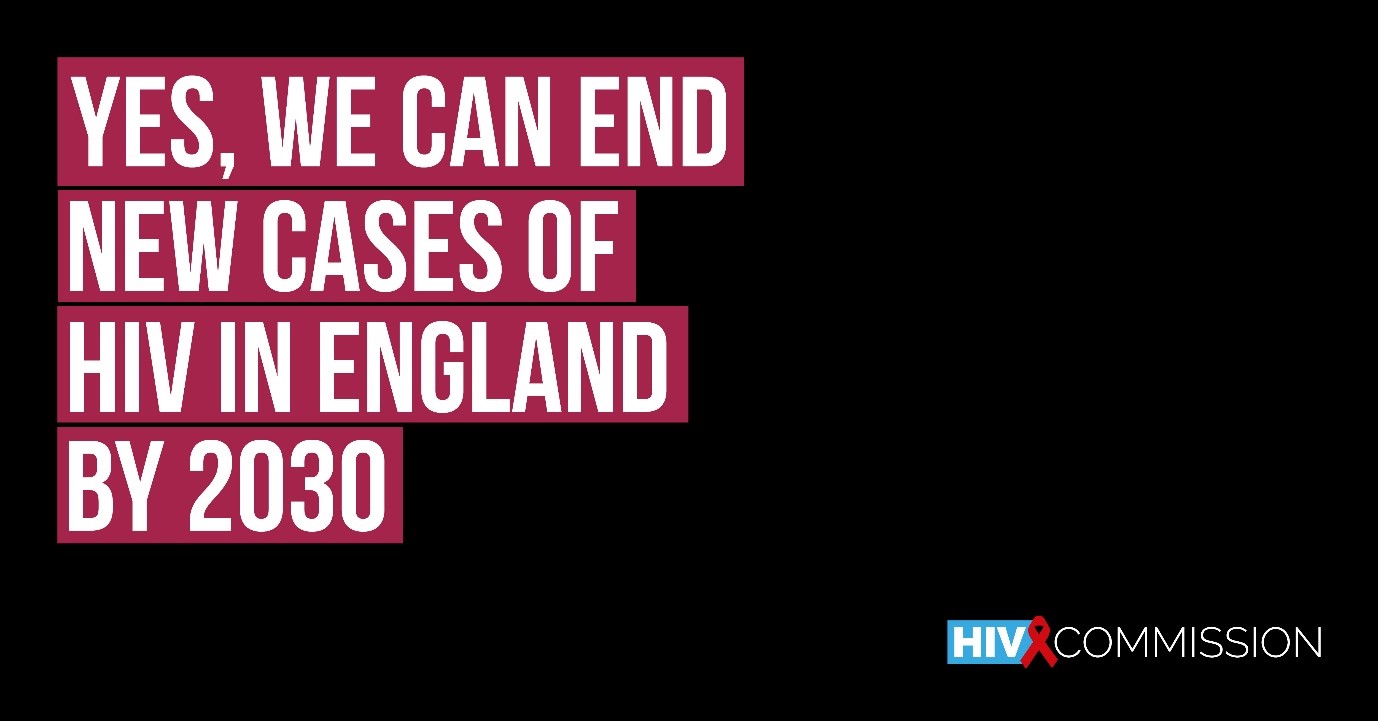 Testing for HIV whenever blood is taken in England – regardless of the person’s gender, ethnicity or sexuality – is crucial to meet the Government’s pledge to end new HIV cases by its 2030 goal.

That’s the step-change being called for on World AIDS Day by the first HIV Commission of its kind in the world, which has released 20 clear recommendations to meet this life-changing target that will see no new cases past 2030.

Because, while the Covid-19 death toll continues to mount and restrictions impact all aspects of daily life, this is a once in a lifetime opportunity for England to end its five-decade-long battle with another virus that has devastated far too many lives.

New data from Public Health England show there are significant missed opportunities to accurately test for HIV – with over half a million eligible people last year not tested in sexual health clinics alone [1]. That’s why it is vital that testing becomes standard practice when registering for a GP, at cervical screenings, in pharmacies and in accident and emergency departments.

It’s estimated that, currently, around 5,900 people in England are living with undiagnosed HIV, which drastically increases the chance of unwittingly passing this virus on. Similarly, someone who receives a late diagnosis has an eight times greater risk of death in the first year compared to those diagnosed promptly.

The UK has been very successful in reducing transmission and in improving treatment so that people with HIV live normal lives. Now, the HIV Commission is calling for everyone to know their HIV status in a move to make the population more conscious of transmission. Without a significant step-change in HIV testing, England will waste its opportunity to become the very first country to end HIV cases within the next decade.

The HIV Commission was established by leading charities Terrence Higgins Trust, National AIDS Trust and Elton John AIDS Foundation to help ensure consistent progress is made every year between now and 2030. Chaired by Dame Inga Beale, the commissioners’ wide-ranging recommendations are based on available evidence and engagement with experts across England, as well as people living with HIV.

The commissioners are highly successful figures from sectors unrelated to HIV, including finance, technology, politics and business, and includes people who understand the realities of living with HIV.

Test for HIV whenever blood is taken

The message from the HIV Commission is clear: England is not on track to meet the 2030 target. This is despite all of the tools necessary to stop anyone contracting HIV, including HIV prevention pill Pre-exposure Prophylaxis (PrEP), condoms, accurate and fast testing options, and effective treatment for people living with HIV that means the virus can’t be passed on.

But these highly effective prevention methods are being woefully underused – with vast disparities in awareness and access across different parts of the country and different groups impacted by HIV.

Worryingly, there were over half a million (549,849) missed opportunities to test eligible people in specialist sexual health clinics last year, according to Public Health England.  Half of those (46%) were not offered a test, while the other half declined.

These numbers led the HIV Commission to recommend no one leaves any sexual health services without being offered a test regardless of gender, ethnicity or sexuality. Being offered a test should not be something that’s seen as offensive or perceived as a moral judgement.

Highly respected bodies – including the National Institute for Health and Care Excellence (NICE) and the British HIV Association – already recommend testing across healthcare but the commission found this is not even close to being implemented.

Maternity services are currently an exemplar when it comes to routine HIV testing, while other parts of our health care systems lag behind. Opt-out testing is routine for pregnant women and there is now a 99% testing coverage. This has led to almost no babies being born with HIV in England.

Now GP surgeries, A&E departments, termination clinics, pharmacies and gender clinics should follow suit – with the funding made available to do so. Many people will never attend a sexual health clinic but will regularly visit their GP while pharmacies are an ideal place to test for those in rural areas or smaller towns.

Over to the Government

The HIV Commission’s recommendations must now inform the Government’s own HIV action plan, including the allocation of sufficient resources and funding to drastically scale up HIV testing across England’s healthcare systems.

The Commission is also calling for the Government to further commit to an 80% reduction in new diagnoses by 2025, which would see cases drop from 2,861 in 2019 to fewer than 600 in five years’ time. That’s because it believes ‘finishing the job’ will be the hardest task.

If all of this is put in place, England will become the first country in the world to eradicate HIV after a five-decade-long fight.

Dame Inga Beale, Chair of the HIV Commission, said: ‘Zero new HIV cases in England by 2030 isn’t a pipedream or social media-friendly date plucked from the air – it’s 100% achievable. That’s why, after a year of gathering evidence, I’m very proud to launch our HIV Commission’s clear and actionable recommendations. We are calling on Government to read, respond and set out what it needs to achieve each year between now and 2030.

‘Our vision for 2030 is a realistic one. It will require a significant increase in funding to enable the much-needed step-change in HIV testing across our healthcare systems but will save our NHS money in the long run. Because only by testing everyone – regardless of ethnicity, gender or sexuality – can we truly normalise testing for HIV and make it a standard part of everyday healthcare. I’m excited to see this vision become reality.’

Sir Elton John, long-time HIV campaigner, said: ‘One thing we’ve learned this year is the importance of testing and testing for HIV is at the core of ending new cases of HIV in England. It’s so important for everyone to know their HIV status to protect themselves and others. Making HIV testing available and normalised throughout the health service not only means people can be treated but by testing becoming routine, this removes some of the stigma that’s holding us back.

‘The HIV Commission report released today highlights this as the overwhelming recommendation to reach the UK government’s commitment to end new HIV cases in England by 2030. We have the chance for England to lead the way and be the first country to end new cases of HIV. We must not miss the chance at this legacy.’

Mercy Shibemba, HIV Commissioner and campaigner, said: ‘As someone living with HIV, I can say with confidence that it’s one of the most highly stigmatised health conditions there is. Our HIV Commission process found that those three letters – HIV – still strike fear in people’s hearts and make them too scared to come forward to test. If we’re to reach our 2030 goal of ending HIV cases, we also need to take the urgent and drastic action to address the stigma and discrimination still surrounding HIV outlined in our report. That includes addressing significant health inequalities to ensure no community is left behind. Because either all of us make our 2030 goal or none of us do – that’s how it works.’

Ian Green, Chief Executive at Terrence Higgins Trust, said: ‘Terry Higgins was one of the very first to die of an AIDS-related illness almost 40 years ago and this virus has devastated both lives and communities. Incredibly, we now have the end of England’s epidemic in our sights if we work harder, test more and grab it. World AIDS Day is an important time each year to remember all those lost too soon to the HIV epidemic – including Terry. But it’s also an opportunity to look to a brighter, achievable future where no one else receives that life-changing diagnosis.’

Deborah Gold, Chief Executive at National AIDS Trust, said: ‘It’s extraordinary that we’re in a position, with the tools at our disposal and a clear roadmap from the HIV Commission, to end new HIV cases nationally in the next decade. To squander this opportunity would be unforgivable. We must make this a reality with urgent action now. The Government must provide strong leadership, additional resources and much wider access to HIV testing to set England on course to end new HIV transmissions. Let’s make sure we mark World AIDS Day in 2030 confident that we did all we could to reach this goal.’

Anne Aslett, Chief Executive at Elton John AIDS Foundation, said: ‘The Commission’s report and findings stress that ending HIV in England cannot be measured by cost alone. But, in a world of competing priorities, cost is a critical factor.  When an HIV test costs under £10, and data from an opt-out testing model in South London suggests that early diagnosis could save the NHS between £200,000 and £500,000 per patient diagnosed early, the implications of the Commission’s opt-out testing recommendations in high and very HIV prevalence settings is really significant. This work can not only save lives, it can save precious funds too.’

About the HIV Commission

The HIV Commission has published 20 recommendations for how England can end HIV cases by 2030.

The 20 wide-ranging recommendations focus on the following areas:

The HIV Commission was established by the UK’s leading HIV charities Terrence Higgins Trust, National AIDS Trust and Elton John AIDS Foundation. It is chaired by Dame Inga Beale, the former CEO of Lloyd’s of London.

The year-long independent commission process included a series of community events, a public online consultation and a national call for evidence from those directly impacted by HIV.

The HIV Commission is publishing its recommendations to mark World AIDS Day, which the Government has committed to review as part of its commitment to publish an action plan to meet its target to end new HIV transmissions by 2030.

National AIDS Trust is the UK’s HIV rights charity. We work to stop HIV from standing in the way of health, dignity and equality, and to end new HIV transmissions. Our expertise, research and advocacy secure lasting change to the lives of people living with and at risk of HIV.

About the Elton John AIDS Foundation

The Elton John AIDS Foundation was established in 1992 and is one of the leading independent AIDS organisations in the world. The Foundation’s mission is simple: an end to the AIDS epidemic. With the mobilisation of our network of generous supporters and partners, we fund local experts across four continents to challenge discrimination, prevent infections and provide treatment as well as influencing governments to end AIDS.

Gareth was hailed at the People’s Postcode Lottery Charity Gala for his charitable and campaigning work, receiving a £250,000 cheque on our behalf.
END_OF_DOCUMENT_TOKEN_TO_BE_REPLACED
Image
Image