We encourage supporters to engage in the Welsh Government’s consultation on ending new cases of HIV by 2030. 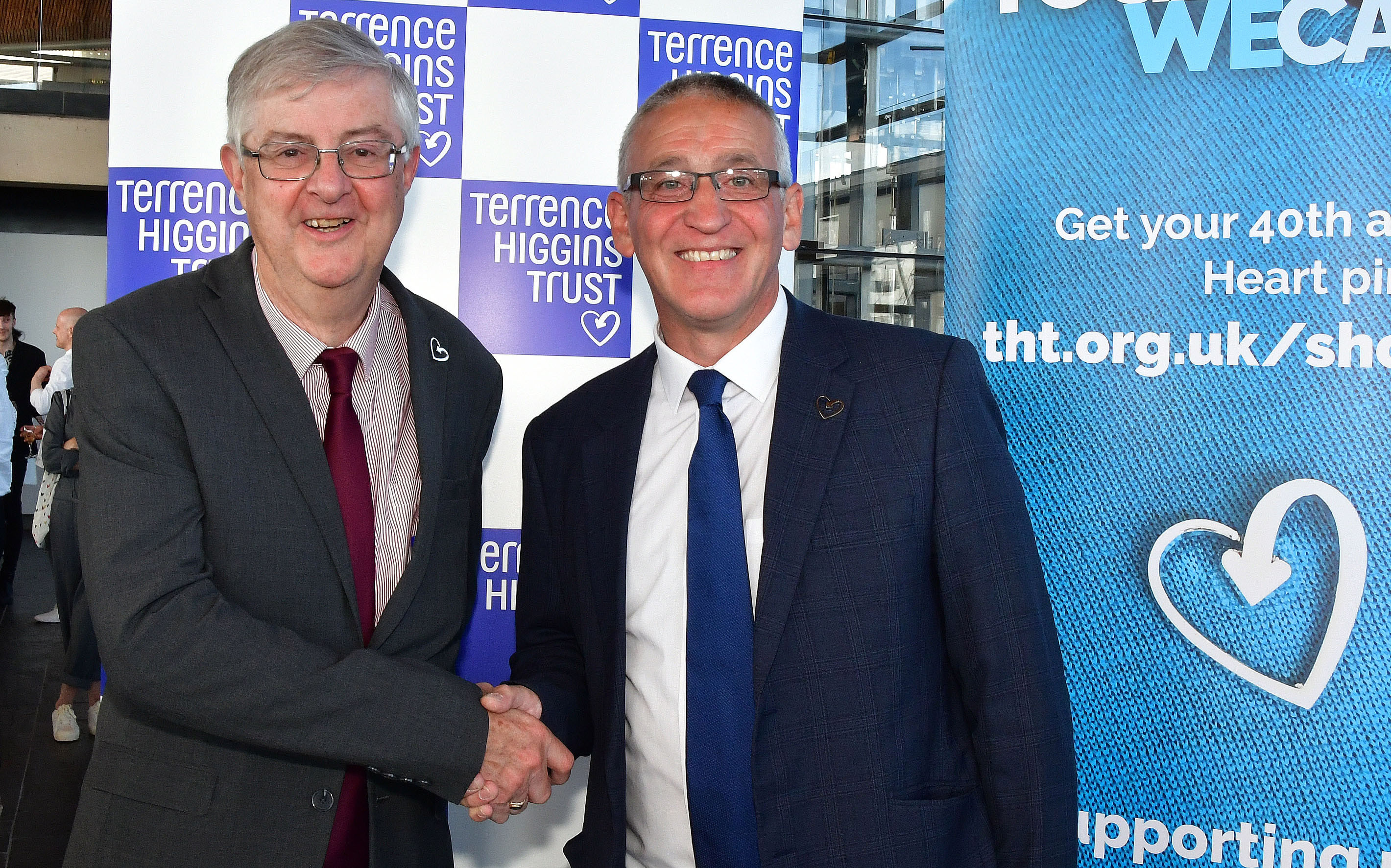 To mark Terry Higgins’ would-be birthday in June this year, the Welsh Government launched its draft HIV Action Plan and opened a consultation into its contents. At the event where a new portrait of Terry was unveiled, the First Minister Mark Drakeford said the plan of 26 actions was 'out there for views, improvements, proposals, suggestions'.

As our Chief Executive Ian Green at the launch event said: 'We encourage [everyone] to send a response. Your views matter.'

To make this easier, we have a recommended response (below) for those who want to end new cases of HIV by 2030 in Wales. It praises the first draft, which we had the honour of working on, and encourages further changes.

Every additional response helps us make the case for change and further action to improve accountability, increase HIV testing, get PrEP into GPs and community pharmacies, and fight stigma.

These ‘overarching actions’ are welcome – especially the creation of Fast Track Cymru (Action 1), the involvement of the voluntary sector (Action 2) and improved data with a new ‘case management surveillance system’ (Action 3). They will drive change.

While it is welcome that ‘health boards and trusts will be required to detail actions they are taking to implement the HIV Action Plan’ (Action 4), so too must Public Health Wales, NHS Wales and the Welsh Government as a whole. In Westminster and Holyrood, annual reports to parliament are included in their respective plans. This should also happen in Wales. The Senedd needs to monitor progress of the plan and the 2030 goal – debates on 1 December 2021 and 14 June 2022 show there is an appetite for this from legislators and the Minister for Health.

Terrence Higgins Trust recommends that Action 4 be reworded to say: 'Health boards and trusts will be required to detail, at quarterly Quality and Delivery meetings, the action they are taking to implement the HIV Action Plan in their delivery plans. Progress of these health boards, trusts, Public Health Wales, NHW Wales and Welsh Government will be reported to, and debated in, the Senedd on an annual basis.'

We also believe that the HIV Action Plan Oversight Group (Action 5) must also include a representative of each health board, as well as local government, the HIV voluntary sector and people living with HIV. The membership of the Group should be included in the Plan.

Question 2. Do you agree with the proposed list of actions? Are there any that you would add or remove from the 26 currently identified?

The scale and scope of the HIV Action Plan are welcome. There are some particularly strong recommendations.

However, there are a number that need to be strengthened:

1. PrEP in GPs and Pharmacy: Where is the deadline? (Action 8)

We have seen this time and again, if there is no deadline there will be no action and this issue will be pushed from pillar to post. Currently PrEP is only available in sexual health clinics, these are urban services and less likely to be visited by those groups with the worse HIV outcomes. It is vital for rural constituents across Wales and underserved groups (women and ethnic minorities) to access the HIV prevention drug, for PrEP to be available in GPs and pharmacies by April 2023.

There should be an explicit commitment in Action 9 that no one should leave a sexual health clinic without being offered a HIV test, unless they are already known to be living with HIV. Time and again there are people not even offered a HIV test, let alone having an introductory conversation about PrEP and HIV prevention. This must change. Those not offered, and most likely to decline a test, are from communities that experience the greatest health inequalities. This must become a normal process, and seen as routine in the eyes of the patient.

One of the most important parts of the action plan is lost in the prose of the report and not reflected in the actual actions. The ‘anonymised seroprevalence study’ is vital to evaluating whether an end-of-day batch-HIV testing system would be effective in diagnosing people, especially those from groups likely to present late. The accountability of this proposal cannot be lost.

Terrence Higgins Trust suggests the Action Plan adds at the end of Action 9: '...and the outcome of the anonymised seroprevalence study undertaken by PHW for HIV and blood borne viruses.'

There are also a small number of issues not currently addressed in the actions:

1. Missing in the ‘Testing’ section: Anything on partner notification

The focus on partner notification cannot be lost. The experience of ‘track and trace’ shows the changes this can involve but sexual health clinics have proved effective at this when it is resourced to do so.

2. Missing in the ‘Living Well’ section: Anything on ageing

People living with HIV are ageing – this is a remarkable phenomena. It is great that combating HIV-related stigma in social care workers is a priority for this report. But this is not the only issue about ageing with HIV - issues associated with long periods without treatment; poverty; adherence to drugs; comorbidities; trauma and experiencing long-term stigma. This should be an ongoing programme of work for the oversight group.

Terrence Higgins Trust suggest the Action Plan include: 'The HIV Action Plan Oversight Group to commission research into aging with HIV and create support for people living with HIV experiencing comorbidities and accessing other NHS services and social care.'

3. Missing in the ‘Stigma’ section: Anything on formal discrimination

Terrence Higgins Trust suggests the Action Plan includes: 'Welsh Government will remain vigilant about how outdated rules can impact negatively on those living with HIV and work with partners to ensure the latest science informs government policy, the work of employers and service providers.'

Question 3. What are the challenges that could mean the commitment to eliminating HIV transmission by 2030 are not met? Are there any clear challenges relating to any specific actions you feel should be highlighted?

The £3.9 million to make postal HIV sample testing, with ‘including an option for rapid test and “click and collect” services’ permanent is vitally important and extremely welcome.

However, funding for some of the other actions and innovations in the report is yet to be committed. These are going to be key to the Action Plan’s success. For example:

In addition, key actions need timescales or deadlines. The case management surveillance system (Action 2, end of 2022), PrEP provided by GPs and community pharmacies in all health board areas (Action 8, should be April 2023) and the HIV awareness training programme for healthcare and social care workers (Action 21 and 22, summer 2023).

Finally, while we welcome that ‘it will be mandatory that all late HIV diagnoses should be investigated and reported by health boards’, the default should be that this is dealt with under the Serious Incident process. This call has been longstanding from BHIVA and was included in the HIV Commission’s key recommendations.

Question 4. Are there any resources (this could include funding, staff time, training, access to support or services among other things) that are not referred to in our Plan, but will be necessary in achieving the aims and actions detailed within this Plan?

None of this can happen without leadership. This has been in abundance at a national level - inclusion in every parties’ manifesto, the First Minister making this a priority policy and two Senedd debates in seven months. However, this must be replicated locally. Health boards need to identify someone who can steer the work and be accountable to local and national oversight. Every health board and trust needs to be presented on the Oversight Group.

Funding for anti-stigma work. This will not happen without drive and resources. The message that people living with HIV on effective treatment can’t pass it on to a partner should be promoted widely (Action 23) – funding for a prolonged campaign and the commitment of a number of partners is needed. The HIV voluntary sector is best placed to do this work.

Question 5. We have asked a number of specific questions. If you have any related issues which we have not specifically addressed, please use this space to report them.

Success: How will we know the HIV Action Plan is a success? Is Wales confident it has met the UNAIDS 2020 goal of 90-90-90 (% of those living with HIV diagnosed, in treatment, undetectable)? Where is the commitment to meet the UNAIDS mid-decade goal of 95-95-95? Will Welsh Government meet the HIV Commission’s recommendation to get new diagnosis down by 80% from 2019 levels by 2025?

Postal testing: Does the £3.9 million for the postal testing service includes a budget to promote the service to users, particularly those from underserved groups and those who have yet to test or test infrequently but would be advised to test? Will this recognise the balance between volume of tests and the higher costs to get some at-risk communities to test? Will this be linked to funding for HIV Testing Week?

Peer support: Will clinics be encouraged or directed to refer newly diagnosed people into the soon-to-be commissioner Peer Support programme and the resources be able to support this? Manchester Hospitals have developed an opt-out referral service to George House Trust’s peer support with positive outcomes after only a short period.

Capacity: The team behind the HIV Action Plan have worked extremely hard to make this happen in addition to their other duties. We wish to seek clarity on what resources will be prioritised by Welsh Government to ensure that this plan is delivered.

Commitment: This is a plan to take us to 2026 – funding, focus and support should be maintained throughout the life of the plan. If this cannot be sustained, the chance of meeting the 2030 goal will be lost forever.

The letter to Steve Barclay MP demands that the Government takes action to stop the virus becoming endemic in the UK.
END_OF_DOCUMENT_TOKEN_TO_BE_REPLACED
Image
Image

Marking 40 years of HIV at the Welsh Senedd