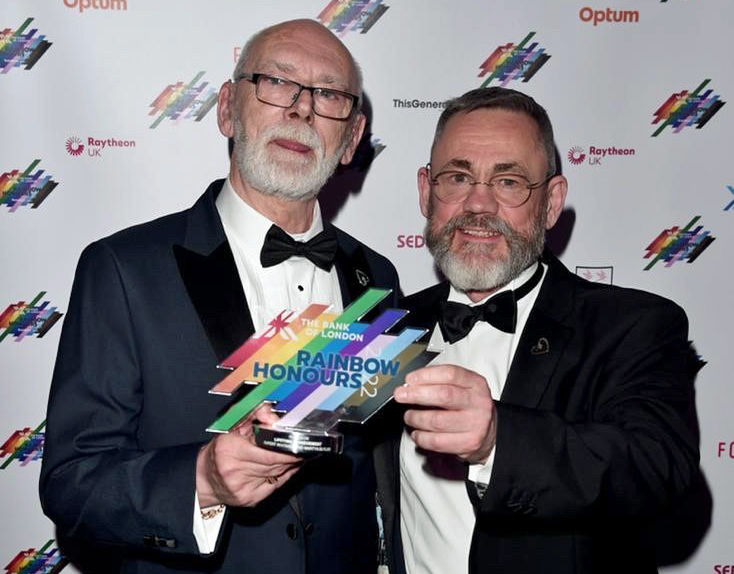 Our co-founders Rupert Whitaker and Martyn Butler have been awarded OBEs for services to charity and public health in the Queen’s Birthday Honours.

Terry Higgins was the first named person to die of an AIDS-related illness in the UK, on 4 July 1982. This led his partner Rupert Whitaker and their friend Martyn Butler to found Terrence Higgins Trust in order to provide vital information about the emerging virus. They set up the charity in his name to humanise the epidemic at a time when hysteria was rife and the gay community was being vilified.

‘Forty years ago Rupert Whitaker and Martyn Butler altered the course of the HIV epidemic by founding Terrence Higgins Trust and, in doing so, saved countless lives,’ said our Chief Executive Ian Green.

‘It is absolutely fitting to see our charity’s founders honoured in this way as we approach the 40th anniversary of Terry’s death and the founding of Terrence Higgins Trust in his memory. We thank Rupert and Martin for turning a personal tragedy into a pioneering response that continues to change lives four decades on.’

On receiving his honour, Dr Rupert Whitaker OBE said: ‘I’m deeply honoured for my work to be recognised in this way. We’ve come a very long way since Terry’s death 40 years ago and the darkest days of the HIV-pandemic, and I’m glad to have played a part through co-founding Terrence Higgins Trust and my community-work internationally, as well as my public health and medical work professionally.

‘This award recognises work that many, many of us have done over the years and I hope it encourages us all to continue to fight for respect and inclusive change, crucial work that, more usually, remains unnoticed.'

Martyn Butler OBE added: ‘I would like to dedicate this honour to all of the millions lost to HIV, including my dear friend Terry who we lost forty years ago. After Terry died we knew we wanted to do something to help others and stop more people from dying like he had. I’m deeply proud of the legacy we have given him and for Terrence Higgins Trust’s role in this country’s HIV response.’

In addition, Rupert and Martyn were honoured by the LGBT community with a lifetime achievement award presented by Stephen Fry at the Bank of London’s Rainbow Honours Awards.

Rupert was the partner of Terry Higgins and was called back to London from university in Durham when Terry collapsed in Heaven nightclub, where he DJed in the evening. On 4 July 1982, Terry passed away becoming one of the first losses of the epidemic and, thanks to Rupert’s bravery, the first to be named as a person who had died of an AIDS-related illness.

Not only did Rupert have to cope with the loss of his partner, pay for his funeral with his student grant and all the associated stigma, but his own HIV diagnosis. Rupert was himself told he had only months to live. He wanted Terry’s death to inspire change and the charity and Rupert continue that work today.

Martyn Butler, who like Terry has moved from Wales to London, worked in film and Television. He and Terry worked together at Heaven nightclub in the evenings – Terry on the decks, Martyn on the laser lights. Martyn hosted early meetings of the Trust after Terry’s death at his Limehouse flat, gave his home phone number for the first Terrence Higgins Trust helpline, embarked on early fundraising and spoke at the Gay Switchboard – Gay Medical Association AIDS conference in 1983 – the first of its kind in the UK.

Read more about our history.

The very limited doses of vaccine we have left in the country must now be prioritised for those most at risk.
END_OF_DOCUMENT_TOKEN_TO_BE_REPLACED
Image
Image