How it all began

How and why we were founded and how we’ve developed as a charity.

Terry Higgins was one of the first people in the UK to die of an AIDS-related illness. He died aged 37, on 4 July 1982 at St Thomas' Hospital, London. By naming the trust after Terry, the founder members – his partner and friends – hoped to personalise and humanise AIDS in a very public way.

Setting the charity up

In 1982, after Terry’s death, his partner Rupert Whitaker and his friends Martyn Butler, Tony Calvert, Len Robinson and Chris Peel met to discuss what could be done. The Terry Higgins Trust was subsequently set up by Martyn Butler and Rupert Whitaker with the intention of preventing others from having to suffer as Terry had. It focused on raising funds for research and awareness of the illness that was then called 'Gay-Related Immune Deficiency' (GRID).

The following year, a public meeting about GRID was organised by London Lesbian and Gay Switchboard and the Terry Higgins Trust at which a small group of committed volunteers from a range of backgrounds came together. This included Tony Whitehead, who went on to become the first chair of the trust's steering committee.

In August 1983, the trust was reborn as a formal organisation, Terrence Higgins Trust, with a constitution and a bank account. By November we were a limited company with a Board of Directors, and by January 1984 we had gained charitable status. We provided direct services immediately, including buddying/home-help, counselling, drug education and sex education.

We were the first charity in the UK to be set up in response to the HIV epidemic and have been at the forefront of the fight against HIV and AIDS ever since.

From its small beginnings in a flat in central London, we have grown to become the UK's leading HIV and sexual health charity, and one of the largest in Europe. We have always been at the forefront of the fight against HIV and AIDS. Since we were formed, the needs of people living with and affected by HIV have been fundamental to our development.

Our roots were in the gay community and, for many years, the HIV epidemic in the UK affected mainly gay men. Nonetheless, we've always worked in an equal way with gay men, haemophiliacs, sex workers and drug users from the start.

As the shape of the epidemic here has changed, so has the charity. There are now around half as many African people living in the UK diagnosed with HIV as gay and bisexual men, though the largest group of new diagnoses continues to be men who have sex with men. So existing services have been developed and new services introduced to meet ever-changing needs.

But the involvement of people with HIV has remained constant, and volunteers and staff who are living with HIV have, and always will be, central to the charity. Of the people who work with us, more than half are drawn from the communities we serve. More than 10% of our employees are people living with HIV, 25% are from Black or other minority ethnic communities and more than a fifth are gay men.

In more recent years, the charity has also developed sexual health services – firstly for people living with or at risk of HIV, and then more broadly for the general population, especially young people who are most at risk of sexual ill health. Again, we have grown and evolved in response to the needs of people using its services.

We have a strong record of collaboration with other agencies in both the voluntary and statutory sectors, and believes very firmly in the benefits of partnership working.

Since 1999 we have merged with a series of other organisations, both in London and further afield, and now has around 400 staff and more than 1,000 volunteers.

These mergers have brought with them a wealth of expertise and experience, enabled the charity to provide services across England, Scotland and Wales, and strengthened its response to HIV and other sexual health issues affecting the UK.

In 2010, we continued this strategy when we stepped in and quickly merged with the HIV charity Crusaid to ensure that its Hardship Fund remained available to help people living with HIV in greatest need.

During 2010 and 2011 we expanded our reach by working with the Elton John AIDS Foundation (EJAF) to launch LifePlus, the UK’s first national long term condition management programme for people living with HIV.

Statistics about HIV in the UK, including how many people are currently living with HIV. Read more about HIV statistics
Thumbnail
Image

Find out what we're campaigning on and how you can help improve sexual health in the UK. Read more about Our campaigns
Thumbnail
Image 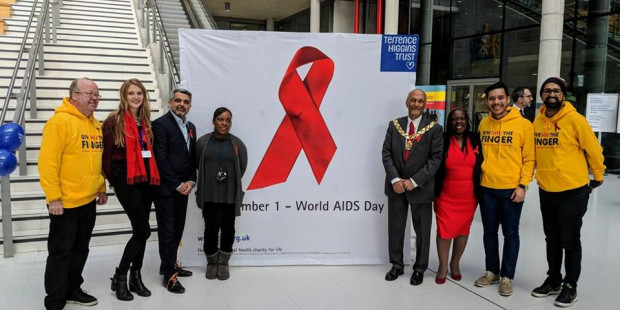 Can your organisation support us?