Condoms are the most effective way to safeguard your sexual health as they provide a barrier that stops sperm, viruses and bacteria getting from one person to another.

The external or 'male' condom is worn over an erect penis (or sex toy), while the internal (aka 'female' condom, or Femidom) is a pouch with two rings inside it inserted into the vagina before sex.

How effective are condoms?

The important thing is to use condoms correctly and consistently.

If over one year men used condoms properly and consistently with their female partners, 98% of these women would avoid getting pregnant.

Internal condoms have a slightly lower level of effectiveness – 95% if used correctly.

While other contraceptives such as the pill protect against unplanned pregnancies, they offer no protection against STIs, unlike condoms.

Using a condom with other methods of contraception offers extra protection against both pregnancy and infections.

The benefits of condoms

Compared to other products that protect against pregnancy and STIs, condoms are:

Asking a partner to use a condom

You may have condoms but find it difficult to use them (or to ask someone else to use them).

It can be tricky introducing a condom into the situation, which is why it’s always better to bring the subject up long before sex starts. A partner may be relieved that you’ve mentioned it.

The external, or 'male' condom is worn over the erect penis or sex toy, while the internal or 'female' condom is a pouch with two rings inside it inserted into the vagina before sex.

A condom should carry one or both of the symbols below, a sign that it has passed certain tests and is of a decent quality:

Penises come in different sizes, so one size of condom will not fit all.

Sizes are stated on the packet:

Some condoms come covered with a spermicide, a chemical that kills sperm (the packaging will say if a spermicide has been used).

Avoid condoms with nonoxynol-9, which is a spermicide that often irritates the skin.

As spermicides in general might irritate the skin and increase the chance of infections, condoms without them are recommended if you have a choice.

Should I use novelty condoms?

Condoms can come in different flavours (a good idea if you want to use them for oral sex) or with ribbed or shaped surfaces to increase sensation; even ‘glow in the dark’ condoms are available.

Check the packaging of any novelty condom in case it’s not recommended for sexual use – only use condoms with either the European or British Kitemarks shown above.

How long can I keep a condom?

Condoms should last about five years if stored correctly (a ‘use by’ date is on each wrapper). Keep them away from damp and heat (eg, radiators, lamps, direct sunlight).

It’s not a good idea to carry a condom around in your pocket for a long time as it can get damaged by body heat and being crushed.

Some people find condoms tricky to use. Sometimes things go wrong. Here's some help with most common problems.

Some find that rolling a condom over their erection is uncomfortable.

If using a larger and wider size condom doesn't help, one solution might be unrolling the condom a little first, then putting it over the erect penis the same way you would put a sock over a foot, being careful not to get air trapped under the condom or tear it.

If you’re worried about loss of sensation, opt for a very thin or light condom.

The thinner the condom, the better the sensation; the right size is also important.

Some condoms are available with ribbed, raised and shaped surfaces designed to increase sensation to both partners.

If putting on a condom interferes with your erection, try gripping the base of your penis before you put it on – this traps the blood, helping to keep your penis hard.

A cock ring has the same effect but it lasts longer. Asking a partner to put the condom on can also help.

A larger brand of condom (such as Trojan Magnum, Pleasure Plus or Durex Comfort XL) might also be less restrictive to your erection. Larger brands should still stay on as the ring at the base is not any larger than other types of condom.

For people allergic to latex (it makes their skin red or itchy), both external and internal condoms are available that are made from non-latex materials.

These materials also don’t have a latex smell.

Having to stop during sex to look for a condom can be a passion killer.

Have them in places where they’ll be easy to get hold of. Keeping condoms in your wallet, handbag or by the bedside shows you’re taking responsibility for yourself and your sexual partner.

What to do when condoms break?

If you're having rougher or longer sex it could be that a condom might split. Obviously this could put you or your partner at risk of unplanned pregnancy, HIV or another STI. 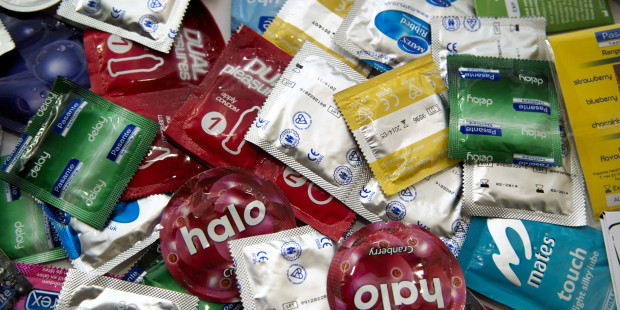 You can get free condoms from many of our offices. In some areas we are also able to provide them free by post. Read more about Free condoms
Thumbnail
Image

How to use a condom

How to use an internal condom

The internal condom (sometimes called 'female' or Femidom), acts as a barrier to pregnancy and sexually transmitted infections (STIs) like HIV. It’s placed inside the vagina and is an alternative... Read more about How to use an internal condom