Almost half of Brits would feel uncomfortable kissing someone with HIV

New poll reveals shocking levels of stigma in the UK.

A major new survey, released on the anniversary of Terry Higgins' death in 1982, shows that attitudes around HIV remain stuck in the 1980s.

Terry was one of the first people to die of an AIDS-related illness, 37 years ago today.

The new survey comes despite huge medical progress in the fight against HIV since Terry’s death, including that people living with the virus and on effective treatment can’t pass it on – with or without a condom.

However, the survey, commissioned by leading HIV and sexual health charity Terrence Higgins Trust, has shown that just under one in five (19%) Brits are aware of this stigma-busting fact.

In the UK, a huge 97% of those diagnosed and on treatment are virally supressed, which means levels of virus in the blood are so low that they can’t pass on HIV.

Despite this being confirmed by two major scientific studies, 41% of Brits believe everyone living with HIV can pass on the virus and 64% would feel uncomfortable having sex with someone living with HIV who is on effective treatment.

‘In just a couple of decades, effective treatment means a HIV diagnosis has gone from a virtual death sentence to where we are now saying with confidence – and without doubt – that people living with HIV who are on effective treatment cannot pass the virus on to their sexual partners,’ says the charity’s Medical Director Dr Michael Brady on the remarkable progress.

He added: ‘Had this effective treatment been available when Terry was diagnosed, he would have been alive and living a healthy life today.’

There is no risk of getting HIV through kissing, sharing utensils or other day-to-day contact. 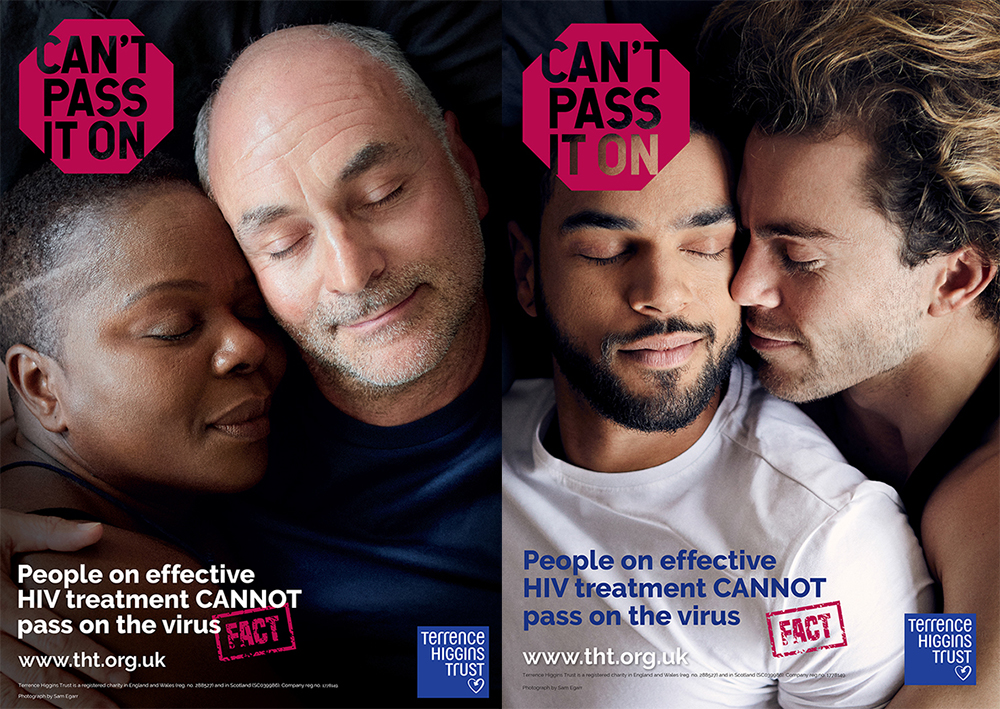 Can’t Pass It On: new campaign features Sadiq Ali (second right) and Charity Nyirenda (far left), who are living with HIV and championing this powerful message

Today the charity – set up by Terry Higgins’ partner and close friends – has launched a campaign to tackle out of date beliefs about how HIV is passed on in an effort to end the stigma and discrimination faced by people living with the virus.

It takes inspiration from one of the charity’s campaigns from the 1990s showing a couple being intimate and the tagline ‘It’s that condom moment’.

While condoms remain the best way to prevent all sexually transmitted infections, the message has changed to one with the power to transform the lives of those with HIV– ‘people living with HIV and on effective treatment can’t pass it on’.

For the past 20 years, evidence has been building to show that the likelihood of passing on HIV is linked to the amount of virus in the blood, also known as viral load. Treatment is deemed effective when it reduces this to undetectable levels. This can take up to six months from starting treatment.

The landmark PARTNER and PARTNER 2 studies provide the medical evidence that people with an undetectable viral load cannot pass on HIV.

Dr Michael Brady, Medical Director at Terrence Higgins Trust and National Advisor for LGBT Health at NHS England, said: ‘Progress in the treatment for HIV is one of the greatest triumphs of modern medicine. In just a couple of decades effective treatment means a HIV diagnosis has gone from a virtual death sentence to us now saying with confidence – and without doubt – that people living with HIV who are on effective treatment cannot pass the virus on to their sexual partners.

‘This has an incredible impact on the lives of people living with HIV and is a powerful message to address HIV-related stigma. And while just 19% of people know about this progress, we have a duty to keep on shouting about it until everyone knows the truth about HIV.’

Last November, Lloyd Russell-Moyle MP publicly announced during a debate in Parliament that he is living with HIV and became the first sitting MP to do so. Part of his motivation for doing this was to provide the public with up-to-date information about HIV.

Lloyd Russel-Moyle MP said: ‘One of the most empowering things in my life since being diagnosed is knowing that I can’t pass on HIV. I can say with confidence that effective treatment means I can’t transmit HIV to my sexual partner and I have a perfectly healthy life, which is absolutely transformative.

‘During my speech in November when I disclosed to the world I was living with HIV, I said this news should go totally unnoticed but it didn’t. The stigma surrounding HIV is still far too high and that’s why we need to double our efforts to stamp out misinformation about HIV.

‘I am very proud to support Terrence Higgins Trust in its Can’t Pass It On campaign. If everyone knew this simple yet transformative fact we could end the stigma and end the fear that many people still have towards HIV. I’m living proof that HIV in no way holds you back in life and this is something to celebrate.’

Charity Nyirenda is living with HIV and is part of Terrence Higgins Trust’s new stigma busting campaign as she feels passionately about educating others about the realities of living with the virus.

Charity Nyirenda said: ‘Black African people like me are more affected by HIV but knowledge among my community remains low, which is something I’m keen to change. I’ve been described as having ‘AIDS’, which isn’t the case – HIV and AIDS are two different things and I’m living well with HIV.

‘I’m proud to be part of this work with Terrence Higgins Trust to bust myths and shout loud and proud that effective treatment means I can’t pass on HIV. There’s no reason to treat me or anyone else living with HIV any differently.’

The artwork of Terry from his school days was painted in Welsh colours of red and green by artist Nathan Wyburn.
END_OF_DOCUMENT_TOKEN_TO_BE_REPLACED
Image
Image