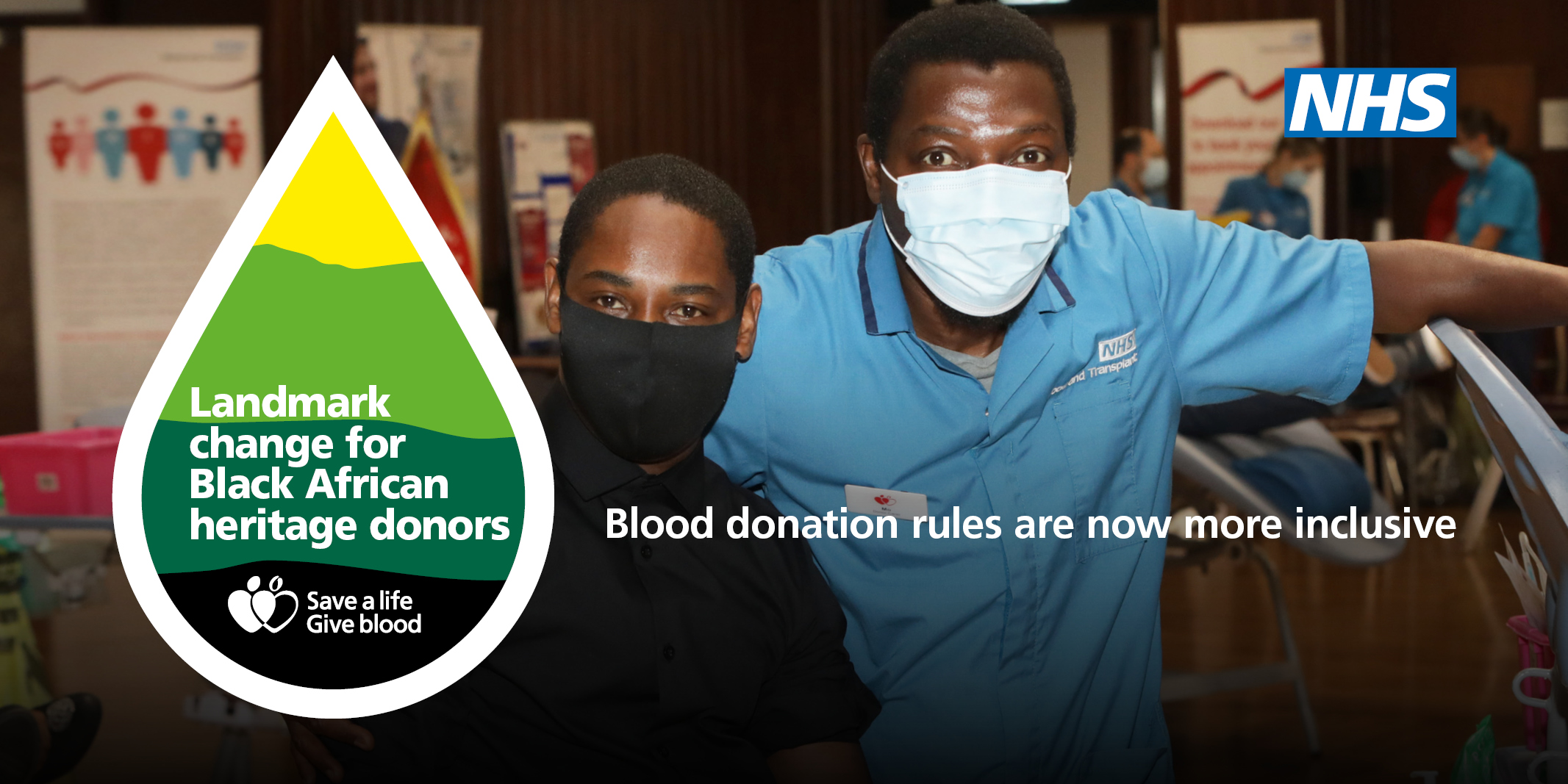 A new campaign – supported by ACLT, One Voice Network, Sickle Cell Society and us – aims to raise awareness of landmark changes to blood donation rules, which now make it easier for more people from a Black African heritage to donate.

It is hoped that more people from Black African communities can now give blood because of the removal of rules around a partner’s exposure to HIV in other parts of the world.

There is currently an urgent need for more Black donors in the UK. Each month 1,300 Black donors are needed to give blood to provide life-saving transfusions to sickle cell patients, as well as for use in emergencies, childbirth, during surgery, in cancer treatments and for use in other medical conditions.

Since December, donors have no longer been asked if their partner has ever had sex in areas where HIV is endemic – which includes most of Sub-Saharan Africa.

Instead, all donors are now asked the same questions about recent sexual behaviours and are eligible to donate if the risk of past or recently acquired infection is low.

This broader change to how eligibility is assessed initially came into effect in the summer last year and paved the way for a later decision by the Government to remove the question about a partner’s past sexual behaviours abroad.

It came after a review of scientific evidence by the FAIR (For the Assessment of Individualised Risk) steering group on the latest epidemiology and risk of infection, which was led by NHS Blood and Transplant and involved patient groups and stakeholder organisations including us.

NHS Blood and Transplant has already contacted 12,000 people of Black African heritage and who were previously deferred, and who may now be eligible to donate blood to notify them of the change.

Alex Cullen, Head of Blood Donation Marketing at NHS Blood and Transplant, said: 'We are proud of our work through FAIR to advise the Government on the latest science and evidence on individual risk of sexual infection, which led to this landmark change.

'This question affected people of all ethnicities and their partners, but in particular people with African heritage – and amongst them many in the Black African community were put off the idea of giving blood because of it.

'In recent years nearly a third more Black donors have been saving lives, but there has also been a 50% rise in patients with sickle cell disease, who, themselves are often of Black heritage, and need a rare blood type that is commonly found in people of the same ethnicity.

'We now have an opportunity to build on our existing work with Black communities and encourage more people of Black heritage to donate by raising awareness of this eligibility change and promoting the urgent need for more ethnically matched blood.

'We welcome the support of ACLT, One Voice Network, Sickle Cell Society and Terrence Higgins Trust to amplify this important message.'

If you have been put off from donating blood and saving a life, it is time now to step forward.

Maria Caulfield, Minister for Patient Safety, said: 'Giving blood saves lives and I am absolutely committed to making sure blood donation is more inclusive and accessible as part of levelling up health care services for everyone across the country.

'This change has been another progressive step forward to create a fairer system. Focusing on individual behaviours, rather than blanket deferrals, and reducing limitations for people to donate blood has made it easier for Black donors in particular to safely donate rare blood types. I encourage anyone eligible to register to donate blood – it’s quick and easy.'

Glenda Bonde, our Director of Equity, Diversity and Inclusion, said: "Donating blood is important for everyone. Ethnically matched blood is in high demand and short supply, which is particularly important for those living with Sickle Cell who need a regular supply.

'Terrence Higgins Trust has campaigned, alongside our partners, for many years to see the rules around blood donation updated to reflect the latest scientific understanding of HIV and wider blood borne viruses. We welcome these changes which bring England into line with the advice of FAIR and will maintain the safety of blood supply.

'If you have been put off from donating blood and saving a life – or never thought about it before – it is time now to step forward. This change is a huge opportunity for members of the Black community needing blood and plasma.'

Tracy Williams, Blood Donation Lead at the Sickle Cell Society, said: 'The importance of a readily available supply of ethnically matched blood to treat people with sickle cell cannot be underestimated. Blood from people with the same ethnic background is vital to keeping those most severely affected by sickle cell alive and well, enabling them to lead fulfilling lives and pursue their goals.

'The Sickle Cell Society’s Give Blood, Spread Love project welcomed the removal of the rule preventing anyone with "a partner who has been sexually active in parts of the world where HIV/AIDS is very common" such as "most countries in Africa" from donating blood for a period of three months. In reality, the "three-month deferral period" meant that many potential Black African donors, and others in long term relationships, were permanently prevented from donating lifesaving blood and plasma.

'Through Give Blood, Spread Love’s work engaging Black communities on the topic of blood donation, we have frequently met people who have been unable to donate blood due to this rule. We know how important securing trust from Black communities is when asking people to donate, and we are hopeful that this significant and overdue change will encourage more potential Black-heritage donors to come forward, and that the 12,000 people previously prevented from giving blood will recognise this call to action and restart their blood donation journey.'

Deryck Browne, Chief Executive at One Voice Network, said: ‘We are very proud to stand alongside NHS Blood and Transplant, African Caribbean Leukaemia Trust, Terrence Higgins Trust, and Sickle Cell Society, as we mark this crucial change in the blood donation rules.

'There is a shortage of African heritage donors and it is right that we should be encouraging our communities to donate in greater numbers and with fewer restrictions. It is also important now that there is clarity about the changes across the system and that healthcare professionals on the front line are brought up to speed.

'We are pleased to be a part of the community awareness campaigns to ensure that Black communities are aware of the recent changes and that they can now exercise their right to donate much needed blood and blood products.'

Our new ambitious strategy sets out our five key priorities for the next three years.
END_OF_DOCUMENT_TOKEN_TO_BE_REPLACED
Image
Image