The Duke of Sussex has called for HIV testing to be ‘completely normal and accessible’ in a new video for National HIV Testing Week 2018. 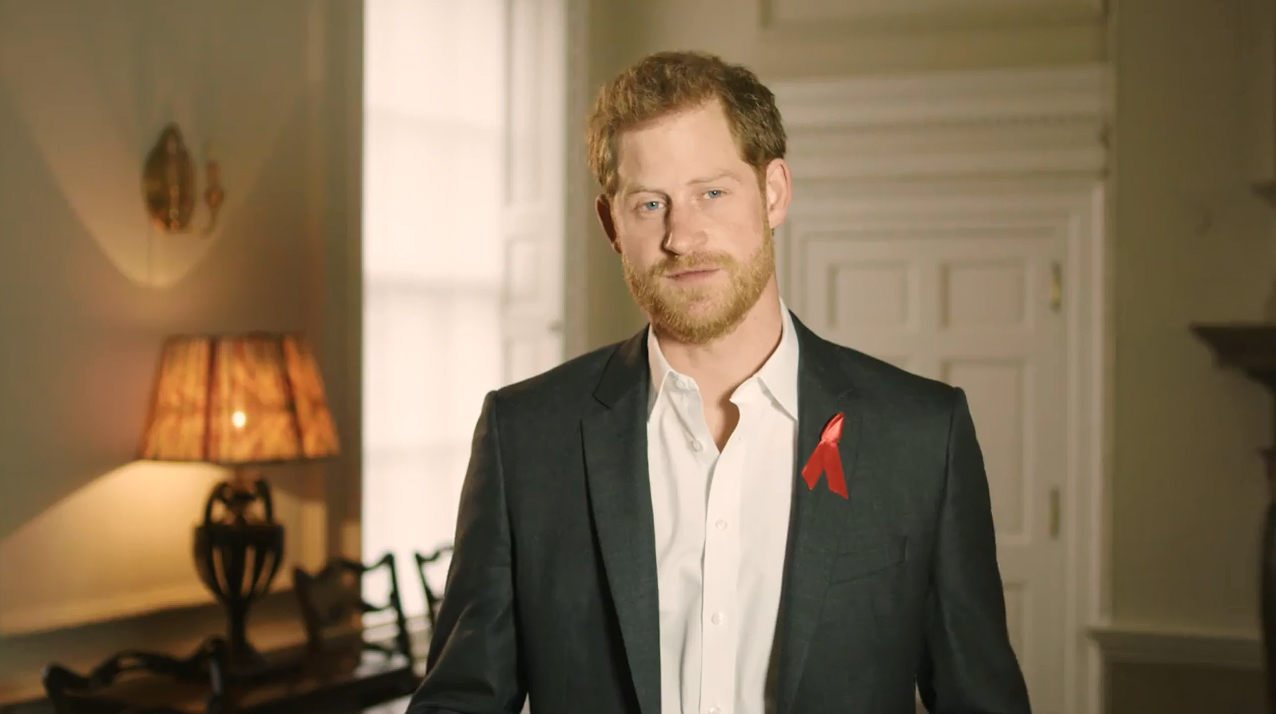 Today (17 November) His Royal Highness The Duke of Sussex has called for HIV testing to be ‘completely normal and accessible’ in a new video marking this year’s National HIV Testing Week.

His Royal Highness added: ‘As much as you protect yourself at this time of year from illnesses and viruses like cold and flu, you can also protect your health by taking an HIV test’.

Terrence Higgins Trust, the UK’s leading HIV and sexual health charity, has commended The Duke’s support for tackling HIV stigma and normalising testing, as it works towards its ambitious aim of getting to zero new HIV infections.

The charity added there needs to be greater focus on tackling ‘worryingly high rates of undiagnosed and late-stage HIV’.

Latest statistics from Public Health England (PHE) show that around 1 in 8 people living with HIV are undiagnosed and unaware they have the virus; while more than four in ten (43%) of those newly diagnosed in 2017 were diagnosed at a late stage of HIV, which means damage to the immune system had already begun.

That’s why regular testing and early diagnosis are key. PHE reports that late diagnosis is associated with a ten-fold increased risk of short-term mortality.

But The Duke also said there is ‘something to celebrate’, with a 28% drop in new HIV diagnoses over the last two years. However, he also warned ‘this is no time for complacency’.

His Royal Highness, wearing a red ribbon in solidarity with all those living with HIV globally, called for testing to become ‘the norm’ and said, ‘We won’t bring an end to the Human Immunodeficiency Virus until testing is seen as completely normal and accessible for everyone’.

People aged 65 and over were more likely to be diagnosed late (61%) followed by men who contracted HIV through heterosexual sex (59%) and black African men and women (58%), which shows the importance of everyone being aware of HIV – regardless of gender, sexuality, ethnicity or age.

The only way to know your HIV status is to take an HIV test. That’s why promoting how quick and easy it is to test for HIV is the focus of National HIV Testing Week.

The Duke of Sussex has advocated for the importance of HIV testing both in the UK and globally. When he tested for HIV live on Facebook two years ago, there was a five-fold increase in orders for HIV tests from Terrence Higgins Trust.

Last year His Royal Highness marked National HIV Testing Week by visiting the charity’s pop-up shop in Hackney to give out HIV self tests to the local community, where you can test at home and get a result within just 15 minutes. He also joined singer Rihanna to take an HIV test to mark World AIDS Day in 2016.

Testing for HIV has never been easier or more convenient. You can order a free HIV postal test at www.test.hiv or find out where to test locally via startswithme.org.uk.

Speaking in the video message, The Duke of Sussex said: ‘There is still too much stigma, which is stopping so many of us from getting a simple, quick and easy test. We won't bring an end to the Human Immunodeficiency Virus until testing is seen as completely normal and accessible for everyone…

‘Taking an HIV test is something to be proud of, not something to be ashamed or embarrassed about. Two years ago, I took a test and the whole process was actually really easy; the result came back within just a few minutes.’

His Royal Highness added: ‘It's simple - by getting tested you are helping stop the HIV epidemic in its tracks. You are helping to save lives.

‘This is such a pivotal time in the fight against HIV if we can continue to make HIV testing the norm and empower young people to take control of their sexual health, we can be the generation to finally bring an end to HIV.

Ian Green, Chief Executive of Terrence Higgins Trust, said: ‘We’re thrilled to have The Duke’s continued support for tackling HIV stigma and normalising testing, ahead of what we hope will be the most successful National HIV Testing Week ever.

‘As His Royal Highness says, we protect ourselves from cold and flu at this time of year – so let’s protect ourselves against HIV by getting tested and knowing our status. It’s an ambitious aim, but we have a real opportunity to get to zero new HIV infections in the UK.

‘While we’ve seen impressive declines in new HIV diagnoses over the past two years, much more needs to be done to drive down rates of undiagnosed and late-stage HIV. That’s why National HIV Testing Week and His Royal Highness’s support are so important.

‘When it comes to HIV, the earlier you’re diagnosed, the better it is for your health. That’s because effective treatment shrinks the virus in the blood to undetectable levels, which protects the immune system from damage and also means HIV can’t be passed on to anyone else.’

Duncan Selbie, Chief Executive of Public Health England, said: ‘Testing and early diagnosis are critical to ensure that those with HIV can access effective treatments and go on to live a long and healthy life.

'HIV testing and treatment is free and available to all. You can take a test in your own home or at sexual health services, GPs, healthcare and community settings nationwide. In many cases the test involves a simple finger prick and results are ready within minutes. HIV prevention is as important now as it has ever been and I urge you to take up the offer of a test.’