Hearing the voices of the Macfarlane Community

How we're ensuring that former beneficiaries of the Macfarlane Trust are heard in our work.

Following the closure of the Macfarlane Trust, we're supporting those living with and affected by HIV as a result of the Contaminated Blood Scandal.

During the 1970s and 1980s, blood products infected with HIV and hepatitis C were given to people living with haemophilia and other blood disorders. Thousands of lives were lost as a result and people continue to be impacted today.

We know and appreciate how important it is that the voices of former beneficiaries of the Macfarlane Trust are heard in our work. The Community is made up from those infected through contaminated blood products either directly, through a partner or affected as family members. For too long the stigma associated with HIV has often prevented this group from speaking out.

From the survey results we're sharing in this blog, we know that 68% of those from the Macfarlane Community who responded either strongly agreed or agreed that ongoing stigma around HIV has prevented them being as open about their status as they would have liked. We're committed to creating opportunities for this Community to consult on the work we do.

Last month we published to the Macfarlane Community the results of a survey they completed. We learnt a great deal from the survey results and will use this as a foundation for our services and advocacy work on contaminated blood now and in the future.

In 2018, a public inquiry began into the Contaminated Blood Scandal. The inquiry was temporarily suspended due to COVID-19.

We asked the Macfarlane Community for their feelings about the inquiry re-starting. The results were very mixed. 40% reported feeling apprehensive, 39% sceptical and 28% nervous. In contrast 33% reported feeling eager, 20% relieved and 19% happy. 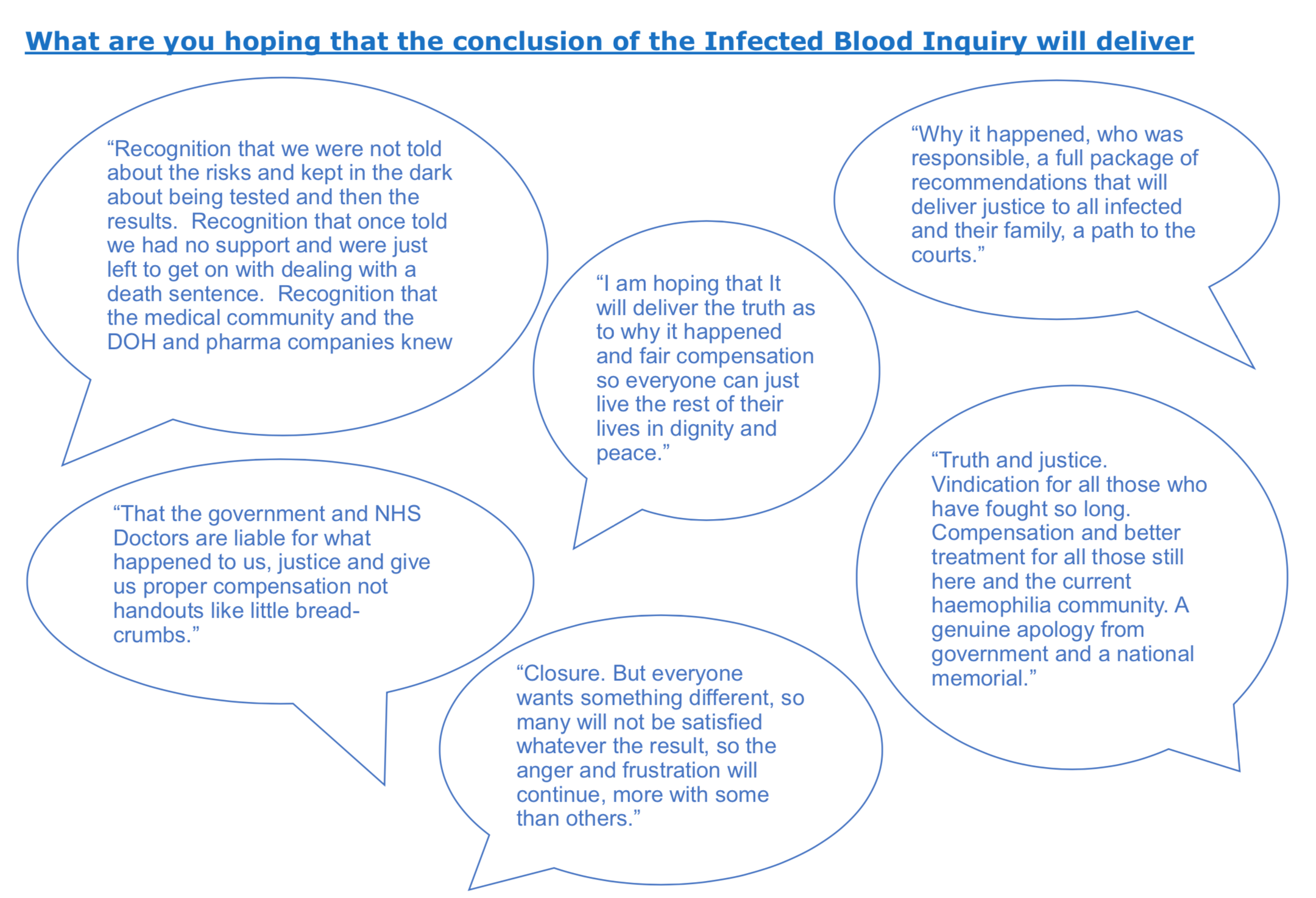 The top three possible outcomes from the inquiry that the Macfarlane Community said were important to them were, a financial compensation package for admitted fault, actioned recommendations to stop anything similar from ever happening again and increased financial support.

More than two thirds of respondents stated that they agreed or strongly agreed that those responsible for the Contaminated Blood Scandal should face prosecution.

Each nation of the UK has its own infected blood support scheme. These schemes were set up to support people historically infected with HIV and/or hepatitis C from NHS blood or blood products. None of the four support schemes received 50% of the Macfarlane Community saying their experience of them was either very positive or positive.

From the additional feedback we have received this may in part be due to the support schemes using the failed models for financial support from the past as their basis, as well as a need for the support schemes to evolve to understand and develop based on the changing needs of those who are growing older with HIV.

72% of the Macfarlane Community either strongly agreed or agreed that it is our role to support and advocate for those living with/affected by HIV as a result of contaminated blood products.

Additionally, 91% of the Macfarlane Community either strongly agreed or agreed that we must keep up pressure on the Government following the publication of recommendations and the inquiry report.

Based on these results our advocacy priorities are focused around the infected blood inquiry, the infected blood support schemes and the review into compensation frameworks that was announced by the Government after the survey was completed.

Survey respondents also told us that the most important services for us to offer them fall into three broad groupings.

The first grouping is around counselling. We already offer a trauma counselling service for the Community and will look at introducing grief and bereavement counselling as this was also seen as a priority.

The second grouping is health and wellbeing. Complementary therapies and gym access were services that the Community told us they would like offered.

Thirdly, advice and individual advocacy. This includes welfare benefits advice which was recognised as a priority. The return of a residential weekend event was also popular.

Based on further feedback, we also recognise the importance of putting in place support for the Macfarlane Community so they can process the outcomes of the inquiry and the compensation framework review. We understand that as this is such an important milestone in the 30-year fight for justice and fair compensation that people will need support to help them move forward.

Macfarlane Trust beneficiaries were not consulted by the Macfarlane Trust when it closed to seek their views on the Trust’s assets being gifted to us. We know that this has caused upset to some. We hope that as we move forward by working together we can heal any pain that people may feel around this.

Forty years since the first reported cases of HIV

Exactly four decades ago, the world changed forever with the first cases of what would become known as HIV reported in the United States. Much has changed since, but too much hasn’t.
END_OF_DOCUMENT_TOKEN_TO_BE_REPLACED
Image
Image