Gareth was hailed at the People’s Postcode Lottery Charity Gala for his charitable and campaigning work, receiving a £250,000 cheque on our behalf. 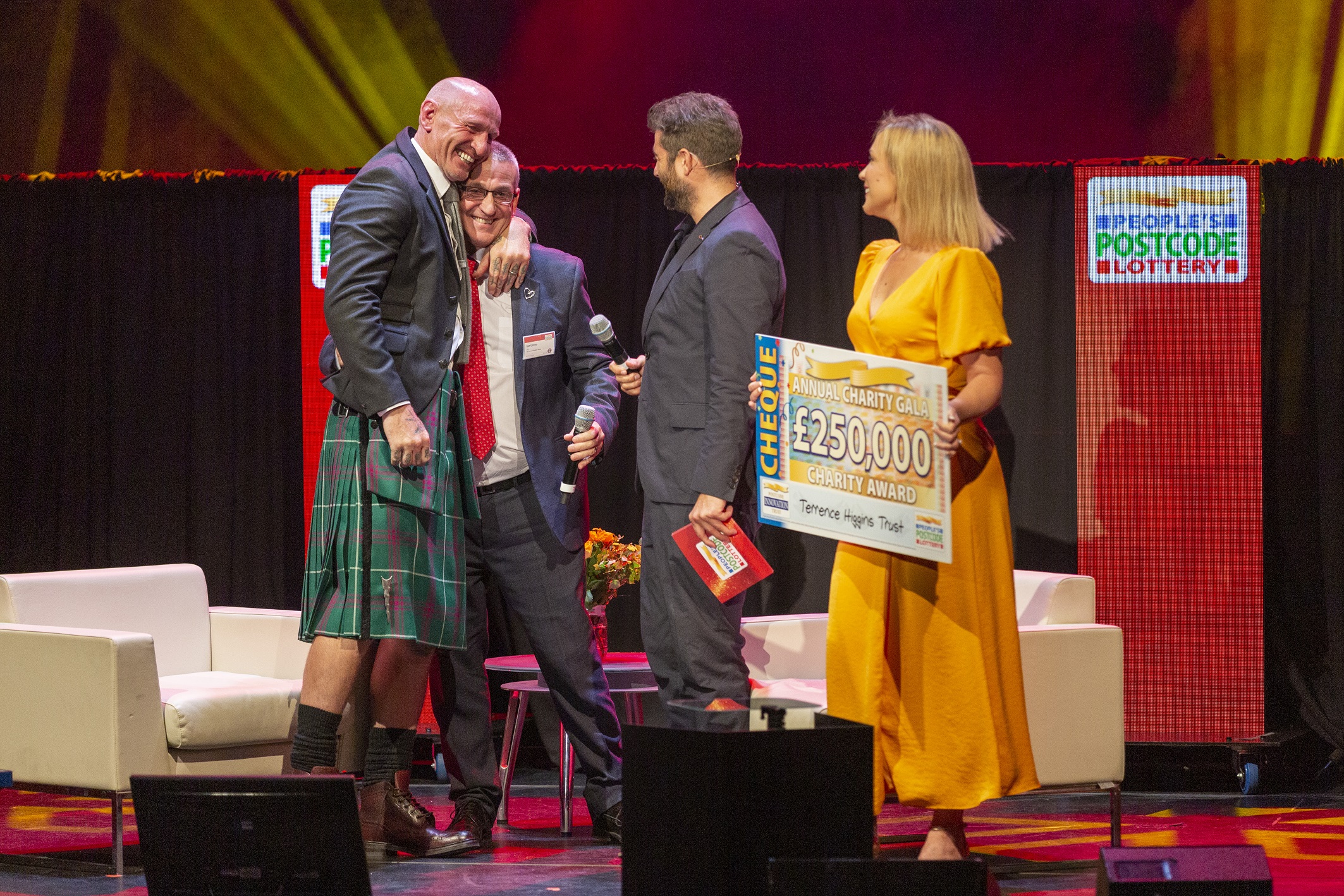 The Postcode Hero award recognises an individual who has made an outstanding contribution to society through their charitable and campaigning work. The prestigious prize was presented to Gareth in recognition of his work to tackle the stigma around HIV.

During the ceremony at the Edinburgh International Conference Centre, Gareth also received a cheque for £250,000 on our behalf.

The money was raised by the players of People’s Postcode Lottery and will allow the charity to deliver vital support for people living with HIV and to tackle the stigma still surrounding the virus. The funding was awarded by the Postcode Innovation Trust.

The theme of this year’s Postcode Lottery Charity Gala was courage. Speaking at the event, Gareth recalled his decision to speak publicly about his sexuality and to use his HIV diagnosis to challenge prejudice about those living with the virus.

Gareth came out as gay in 2009 and revealed his HIV diagnosis ten years later. He was the first openly gay professional rugby player and has worked tirelessly to end the stigma around HIV and challenge homophobia in sport.

The former Wales and British and Irish Lions internationalist said: 'I am ecstatic to have received this year’s Postcode Hero award, and to be presented with a cheque on behalf of Terrence Higgins Trust for £250,000 is phenomenal.

'I am an openly gay man and openly live with HIV and I am passionate about campaigning for both, but I will stand up for anyone who is facing any type of discrimination.

'Some people might think that shows courage, but I don’t see it that way. It is just the right and just thing to do and I will always be an ally for those that need it the most.'

Clara Govier, Managing Director of People’s Postcode Lottery, said: 'The annual Postcode Hero award is designed to highlight the achievements of truly extraordinary individuals who share our vision of a fairer, healthier, greener world and who are working to make it a reality.

'By playing and winning together, our four million players across Britain are raising vital funds for a wide range of charities and changing lives for the better.'

Our Chief Executive Ian Green said: 'It’s brilliant to see Gareth honoured as this year’s Postcode Hero in recognition of all he’s done and continues to do to update public perceptions of what it means to live with HIV today.

'We’re incredibly grateful to both Gareth and the players of People’s Postcode Lottery for this funding, which will help ensure our continued support for people living with and affected by HIV and to challenge the stigma still surrounding the virus. We’ve come a long way in the fight against HIV over the last 40 years – but it’s not over.'

People’s Postcode Lottery’s annual Charity Gala is a celebration of the achievements of the good causes which have received funds raised by players. It's attended by charity representatives and lottery winners.

Players of People’s Postcode Lottery have raised more than £900 million for charities and good causes working across Britain and beyond.

The artwork of Terry from his school days was painted in Welsh colours of red and green by artist Nathan Wyburn.
END_OF_DOCUMENT_TOKEN_TO_BE_REPLACED
Image
Image