Still Got it: sexual health of the over 50s 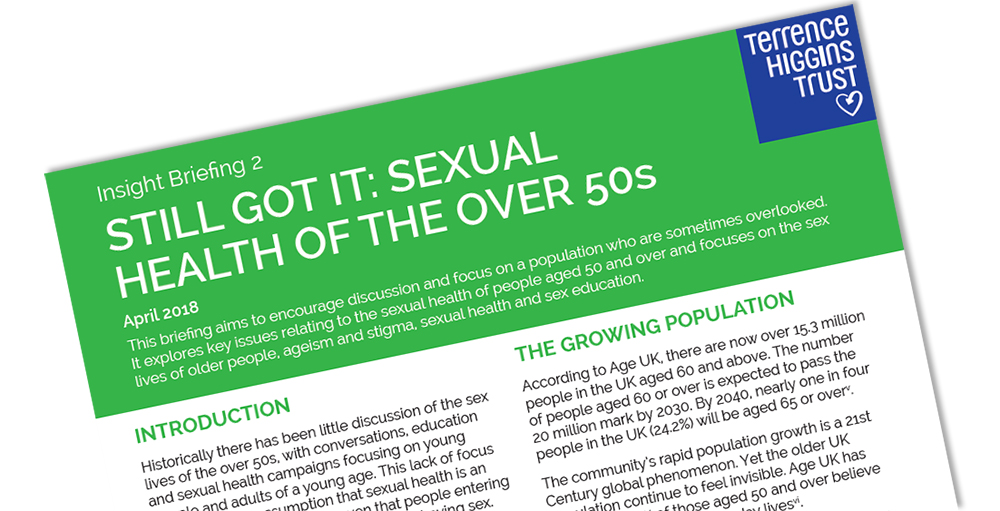 It’s a long-held myth that people of retirement age aren’t sexually active. Sex isn’t just for young people, despite what you would think from TV, magazines and sexual health campaigns.

So it’s high time we stopped avoiding the topic of older people and sex. We need to start challenging the outdated beliefs that are affecting this generation’s sexual health.

To help fight that myth and improve awareness of the sexual health of older people, we’ve produced a new insight briefing: Still Got It: Sexual health of the over 50s.

There are over 15 million people in the UK aged 60 and above, a population that is seeing unprecedented growth. Alongside this, the number of sexually transmitted infections (STIs) has seen a 9% increase in people aged 45 and over between 2012 and 2016.

We need more inclusive prevention campaigns to reverse this trend.

Healthcare staff also need to have more open conversations about sexual health with older people. They shouldn‘t work on the presumption that someone isn’t having sex because they’re a certain age.

Similarly, sexual health campaigns have mainly targeted young people. We can now see the repercussions of this with rising STI diagnoses among the growing older population, including a rise in HIV diagnoses.

In 2016, 63% of those aged 65 and over were diagnosed late with HIV (once the immune system has already been damaged). This is more than double for the figure of those diagnosed late among 15- to 24-year-olds.

This is happening because no-one perceives them at risk of HIV – including themselves.

The discussion of sexual health with older communities is often neglected by medical and care staff due to embarrassment, or the assumption of low or no sexual activity. This social taboo can mean those aged 50 and over may not receive advice or STI testing where needed.

Shame and secrecy can lead to late diagnoses and neglect of sexual health and wellbeing. There is a gap in need where the over 50s are not getting advice on good sexual health or having the opportunity to discuss concerns or feelings about sex, intimacy and sexuality.

Yet over 80% of people aged between 50 and 90 are sexually active these days, with two thirds rating sex as a vital component of their relationships.

We live in different times now. People are living much longer healthier lives. And advancements in medicine have also contributed to our longevity and improved our sexual health.

The medicalisation of sex – thanks to erectile dysfunction drugs such as Viagra – means that Baby Boomers are now able to enjoy more sex during old age than any previous generation. Sex plays a vital role in overall holistic health and so should be recognised as an important factor to be included in medical and care routines.

As the number of over 50s continues to grow, updated knowledge about their sexual health needs to enter the mainstream. This information is long overdue and more focus needs to be given to such an important area of everyday life.

How to have sex while managing the risk of COVID-19

Dr Michael Brady, Medical Director at Terrence Higgins Trust, shares how to have sex while managing the risk of COVID-19
END_OF_DOCUMENT_TOKEN_TO_BE_REPLACED
Image
Image