The RuPaul's Drag Race UK star opened up after being asked how she started doing drag. 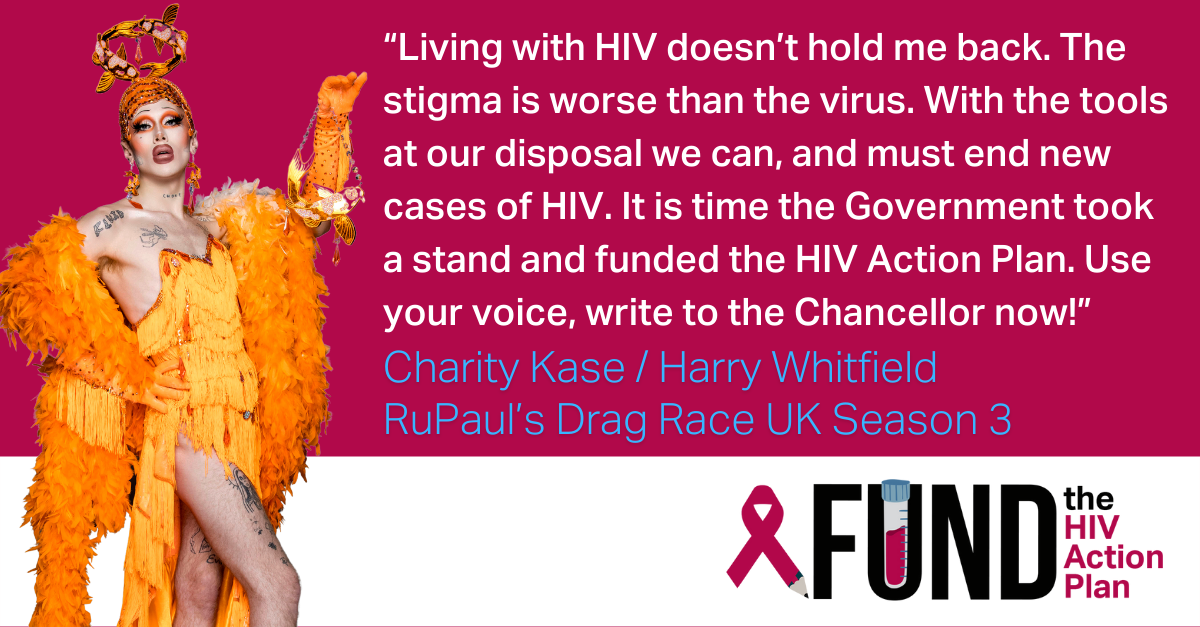 On the most recent episode of RuPaul’s Drag Race UK, Charity Kase spoke about her experiences of living with HIV. She discussed HIV stigma, the reality of living with the virus and how drag became her therapy.

Previous seasons of the hit reality TV show have been applauded by viewers around the world for its poignant conversations on a range of important issues including Section 28, non-binary identity and sexually transmitted infections (STIs).

During an emotional conversation with fellow queen Kitty Scott-Claus, Charity explained that she got into drag as a way of expressing her emotions. It was therapy for her during a dark time.

Charity was diagnosed with HIV when she was 18. ‘It was really hard for me to process that at 18. I was still a child, you know what I mean?

‘Drag was a massive massive help to me. Coping with these emotions that I didn’t know how to deal with. Becoming Charity was definitely a sort of therapy to me and a way for me to express myself.’

I wouldn’t change my experiences for the world.

She explained that it was the stigma associated with HIV that was the most damaging aspect of their diagnosis.

'The stigma hasn’t gone anywhere and unless you have a personal connection with somebody who has that experience, you’re not educated around it. It’s important that it’s taught in schools and that’s why it’s important that we talk about it.

'I wouldn’t change my experiences for the world cause I’m really proud of who I am today. I am comfortable with what I do and who I am and that’s why I’m so passionate about my drag.'

Ian Green, Chief Executive at Terrence Higgins Trust, said: ‘It’s incredible to see Charity Kase using their platform on RuPaul’s Drag Race UK to educate people across the world on HIV and show that a diagnosis doesn’t have to stop you from living life to the fullest.

'As Charity explains, we’ve made so much progress in the fight against HIV – including that people on effective treatment can’t pass on the virus and can expect to live just as long as anyone else. However, public awareness about HIV hasn’t caught up with the medical advancements. Stigma and misconceptions about the virus continue to halt progress and lead people to feel shame, fear and anguish about their diagnosis. They’re a big part of why people living with HIV are far more likely to experience mental health problems than the general population.

'People like Charity are fundamental in changing negative attitudes towards HIV and tackling stigma. We’re thrilled that they are talking openly about the realities of living with HIV today and showing that there is absolutely no place for discrimination in 2021.’

Charity has endorsed our joint call with National AIDS Trust and the Elton John AIDS Foundation for the Health Secretary and the Chancellor to fully fund the end of new cases of HIV by 2030. Following the episode, they shared their support on Instagram, asking followers to use their voice and ‘write to the Chancellor now!’

By learning about the virus, you can help end HIV stigma. Find out more about Can’t Pass It On.

The impact of It’s A Sin one year on

The hit Channel 4 show made a profound impact on people from all walks of life.
END_OF_DOCUMENT_TOKEN_TO_BE_REPLACED
Image
Image