Winnie Byanyima, the Executive Director of UNAIDS, has visited Brighton to observe how the city has led the way in HIV prevention and treatment. Winnie is a global leader in the United Nations’ efforts to end the AIDS epidemic by 2030 and is a passionate and longstanding champion of social justice and gender equality.

In 2016, Brighton became the first city in the UK to join the Fast-Track Cities initiative, a group of cities from across the world that has pledged to work towards zero new HIV infections.

The city has earned its reputation of being a world leader in HIV prevention and treatment by exceeding the initiative’s target of 90-90-90. 93% of people living with HIV know their status, 99% of those are on treatment and 98% of those on treatment are undetectable, which means levels of virus in the blood are so low that they can’t pass it on.

During the visit, Winnie observed the Jubilee Library’s HIV test vending machines. Installed by the Martin Fisher Foundation in 2017, these machines are a world first and distribute free self test kits which give a result in just a few minutes. They've been instrumental in Brighton in improving diagnosis rates and destigmatising testing.

Winnie also had the opportunity to attend Lunch Positive, a voluntary community organisation that runs a weekly lunch club, providing a welcoming and supportive space for people living with or affected by HIV. Here she engaged with HIV-positive people living in Brighton and beyond and learned about the work Lunch Positive does to empower the local community and reduce stigma.

Ms Byanyima also met with many local community organisations and other stakeholders involved in HIV prevention and care in Brighton, as well as local MPs and the Leader of Brighton & Hove City Council, to discuss the city’s successful approach to HIV prevention and treatment.

The final stop of the visit was Tay, Brighton’s AIDS memorial in New Steine gardens, for a moment of reflection and remembrance. Created by Romany Mark Bruce, the sculpture was inspired by Paul Tay, Romany’s friend and soulmate who died from AIDS-related illnesses in 1992. Winnie had the opportunity to meet the artist and discuss their inspiration behind the piece. 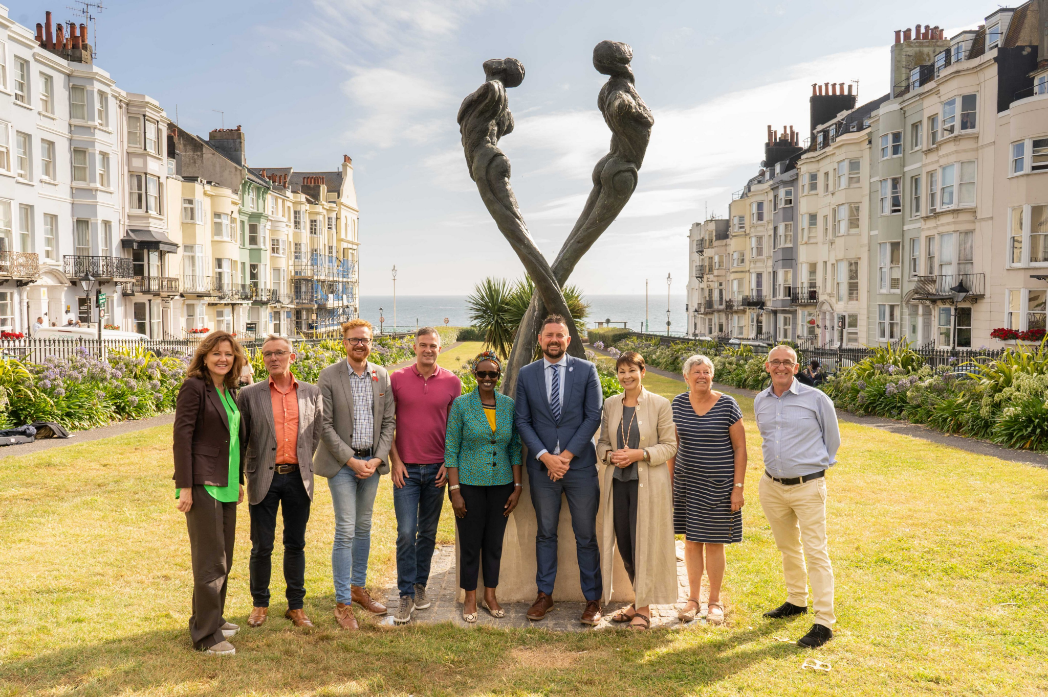 Speaking about the visit, Winnie Byanyima said: ‘Brighton has made significant progress in the fight against HIV due to their innovative approach. The HIV test vending machines have been fundamental in allowing individuals to take control of their sexual health and the local organisations there are the life force of people living with HIV. The work they have done over the past 40 years to build a community is invaluable.

‘Brighton’s success shows the effectiveness of political action combined with community-centred support in the fight against HIV. I feel enriched by everything I’ve learned from the city’s services. We will use lessons learned in Brighton to inspire our global response to the AIDS pandemic.’

Marc Tweed, Centre Manager at Terrence Higgins Trust Brighton and Hove, said: ‘Although we’re doing incredibly well here in Brighton, we have our sights set on achieving zero new cases by 2030 and must not be complacent.

‘In order to achieve this goal, we need to see more funding for opt-out HIV testing in Accident and Emergency departments and primary care, and make every blood test count. By normalising HIV testing in these settings, we can reach the undiagnosed.

‘HIV stigma and discrimination also remain a barrier to progress. In Brighton, our local organisations are working collaboratively towards a stigma-free city, however, we need to see a robust and fully-funded HIV action plan from the UK Government to ensure we can continue working to smash stigma and change perceptions of people living with HIV.’

The campaign runs from Monday 7 February to encourage everyone to get tested and give HIV the finger.
END_OF_DOCUMENT_TOKEN_TO_BE_REPLACED
Image
Image