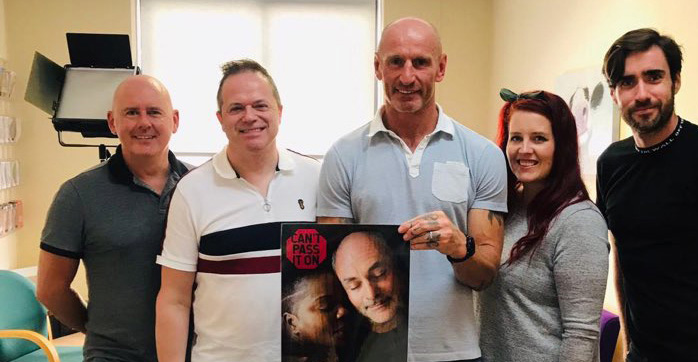 The new role is in recognition of Thomas’s huge impact on perceptions of HIV since speaking publicly in September 2019 about his own diagnosis. By sharing his story, Thomas has helped educate the general public about the progress made in treating HIV.

The charity works to end HIV transmissions, ensure support for all those living with HIV and enable good sexual health for all. It was set up in 1982 by the partner and friends of Terry Higgins, who was one of the very first to die of an AIDS-related illness in the UK.

Thomas came out as gay in 2009 making him the first openly gay professional rugby player. He has since done a huge amount to improve equality within sport and tackle homophobia.

The 46-year-old first spoke about living with the virus for his ground breaking BBC documentary HIV & Me. He also completed an Ironman – a 2.4 mile swim and a 112 mile bike ride followed by a marathon – to show how well he is living with HIV.

His announcement led to a surge in orders to Terrence Higgins Trust for HIV tests, including those where you can test at home and get a result within just 15 minutes.

Since then, Thomas has teamed up with the Duke of Sussex at Terrence Higgins Trust’s event to mark National HIV Testing Week and show how quick and easy it now is to test for HIV.

Research by the charity for World AIDS Day in 2019 found that three in four British adults (74%) were aware that Thomas had spoken publicly about living with HIV. 11% of those said it had improved their overall knowledge of HIV.

He was also announced as a commissioner on the first-ever HIV Commission – tasked with making workable recommendations for ending HIV transmissions by 2030. The Commission is a product of joint working between us, National AIDS Trust and Elton John AIDS Foundation, and is chaired by Dame Inga Beale.

In 2020, Thomas launched Tackle HIV – a new campaign with Viiv Healthcare to challenge perceptions of HIV through sport and bring the realities of the virus to audiences who don’t ordinarily hear about it. Highlights of the campaign include a stigma-busting podcast with Olympian Kate Richardson-Walsh about her experiences as an LGBT athlete.

Gareth Thomas said: “It’s an honour to be named as Terrence Higgins Trust’s newest patron and join such a prestigious list of names who have done so much in the fight against HIV. I’m over the moon to join forces with this amazing charity to fight for the rights of all of us living with HIV and play my part in ending transmissions by 2030.

‘I wouldn’t be where I am today without Terrence Higgins Trust. When I was first diagnosed, it was the charity’s website that taught me about the realities of HIV. Including that effective treatment means I’ll live as long as anyone else and that I can’t pass on HIV to my husband.

‘Now I’m committed to doing all I can to transform perceptions of HIV – not for me, but for all of those who can’t speak up or who don’t have a platform. I want everyone to know that a HIV diagnosis doesn’t need to hold you back.’

Ian Green, Chief Executive at Terrence Higgins Trust, said: ‘We’re proud to announce Gareth as our newest patron in recognition of all he’s done to update people’s knowledge of HIV since speaking publicly about his own diagnosis a year ago. Gareth’s deeply personal story has resonated with so many people who rarely hear about HIV anymore and, because of that, has done so much good for all of us living with the virus.

‘We’re standing at a crucial point in the fight against HIV as we aim for our ambitious goal of zero HIV transmissions by 2030 in the UK. We are undoubtedly in a stronger position with Gareth – and all his fans – our side.’

The very limited doses of vaccine we have left in the country must now be prioritised for those most at risk.
END_OF_DOCUMENT_TOKEN_TO_BE_REPLACED
Image
Image