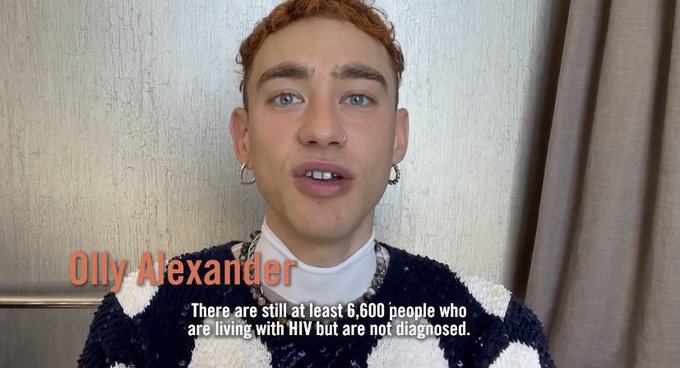 Russell T Davies, Olly Alexander and Callum Scott Howells from hit Channel 4 drama It’s A Sin have joined forces with long-time campaigner Sir Elton John and people living with HIV in a powerful new film calling for government action to end new cases of the virus in the UK by 2030.

The film has been released by us along with the Elton John AIDS Foundation and National AIDS Trust. It aims to inspire fans of the hit show to write to Chancellor Rishi Sunak and Health Secretary Sajid Javid, calling for the UK Government to ‘fund the fight’ to ensure its goal of ending new HIV cases by 2030 is achieved.

This comes ahead of the Comprehensive Spending Review on Wednesday 27 October where funds will be allocated for the next three years.

NEW. Today It’s A Sin’s @alexander_olly, @callumshowells and Russell T Davies are joining @eltonofficial and people living with HIV to call on Chancellor @rishisunak to ‘fund the fight’ to end new HIV cases by 2030.

It’s A Sin has already had a big impact, leading to a surge in orders for free HIV test kits during this year’s National HIV Testing Week. Now its creator and cast are looking to make an even greater impact by playing a part in securing funding for HIV testing to be the norm across healthcare – regardless of sexuality, ethnicity or age.

The UK Government is to publish its HIV action plan outlining how it will end new HIV cases by 2030 at the end of the year after committing to the goal back in 2019. But we're clear this won’t be successful without the proper funding – including for opt-out HIV testing across healthcare services to help find the estimated 6,600 people living with undiagnosed HIV in the UK.

The film also features Florence, Becky and Ese, who are living with HIV and know the life-changing impact of being offered a test for HIV. Because they got tested, they now access the effective treatment they need to live well and are confident in the knowledge that they can’t pass on HIV to anyone else.

Russell T Davies, creator of It’s A Sin, said: ‘The show has had a bigger impact than we ever dared hope. My initial motivation was to tell stories of love and loss that had gone untold for far too long. But it’s clear how much has still to be done in 2021.

‘The response to what we created has been overwhelming, but too many people’s views and knowledge of HIV are still firmly rooted in the 1980s. If we can play even a tiny part in helping to change that while supporting the work of charities and activists to end new HIV cases in this country by 2030, then what a wonderful legacy that would be.’

Florence Obadeyi, who is living with HIV, said: ‘Getting tested for HIV while pregnant was one of the best things that ever happened to me. It meant my child was born without HIV because of interventions they can make prior to birth and means I was able to access the medication and support I needed to keep me well.

‘If I hadn’t decided to have a baby and been testing during standard prenatal checks, I don’t know how long it would have been before I received my diagnosis. That’s exactly why we need to see HIV testing happening across healthcare.’

With this high profile support, the charities are calling on the UK Government to commit to and fund the following to halt new HIV transmissions:

1. Expanded HIV testing. Everyone needs to know their HIV status so they can get HIV treatment if needed. We want to see free at-home testing all year round and regular tests in hospitals and GPs in areas of high rates of HIV.

2. Greater support for people living with HIV. Regardless of where someone lives in the country, they should have access to life-saving treatment, mental health, and support services, so they can enjoy healthier lives.

4. New national HIV prevention programmes and campaigns. These must inform and educate people about the realities of HIV in 2021, stopping HIV stigma and highlighting the fact that people on effective treatment can’t pass the virus on.

UK residents can write to the Chancellor and Health Secretary calling for proper funding for ending new HIV cases by 2030 in just a couple of minutes using our template letter.

The very limited doses of vaccine we have left in the country must now be prioritised for those most at risk.
END_OF_DOCUMENT_TOKEN_TO_BE_REPLACED
Image
Image