London leading the way on HIV

National HIV Testing Week launched on Saturday 17 November to move the capital towards its ambitious aim of ending new HIV transmissions in London.

This follows an incredible 37% decrease in new HIV diagnoses in the city in the last two years. That’s why Mayor of London, Sadiq Khan, has signed the capital up as one of the world’s Fast-Track Cities, committing to ending new HIV transmissions and eliminating stigma by 2030.

London has already achieved the United Nations’ 90-90-90 target of having 90% of people living with HIV diagnosed, 90% of those diagnosed on treatment, and 90% of those on treatment with an undetectable viral load, which means they can’t pass on HIV.

But there’s more to do to reach this important goal and the UK’s leading HIV and sexual health charity, Terrence Higgins Trust – which coordinates National HIV Testing Week on behalf of Public Health England – has warned against complacency in reaching this ambitious but achievable aim.

London is leading the way when it comes to tackling HIV, but there is so much more to do if we are to end new infections. 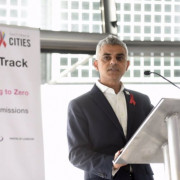 While the number of new diagnoses are falling, around 4 in 10 people (38%) diagnosed with HIV in London are diagnosed late, which is after damage to the immune system has already begun. Public Health England reports that late diagnosis is associated with a ten-fold increased risk of short-term mortality.

Additionally, it’s estimated that around 1 in 8 people living with HIV are undiagnosed, which means they are unaware they have the virus and not accessing the treatment they need to live well, as well as significantly increasing the chances of passing on HIV.

That’s why regular testing and early diagnosis are key. Testing for HIV has never been quicker or more convenient. Those from the groups most affected by HIV can order a free postal test kit from www.startswithme.org.uk, and anyone can find information on where to test locally.

Charities and community groups from across London, including the capital’s HIV prevention programme Do It London, will be out and about throughout the week offering opportunities to test.

Sadiq Khan, Mayor of London, said: ‘London is leading the way when it comes to tackling HIV, but there is so much more to do if we are to end new infections. That’s why this year I signed London up to the Fast-Track Cities initiative and committed us to ending new infections by 2030. Initiatives like National HIV Testing Week are a key part of the work to raise awareness and create more opportunities to get tested, and I urge anybody with any concerns to get tested now so they can get the treatment and support they need.’

Ian Green, Chief Executive at Terrence Higgins Trust, said: ‘It’s important for everyone to know that testing for HIV is quick, easy and confidential. That’s because increasing access to and normalising HIV testing is key if we’re to get to zero HIV transmissions in London and the rest of the UK.

‘Around 1 in 8 people living with HIV in London are unaware they have the virus, which means they’re not accessing the free and effective treatment to protect their health and significantly increasing the chances of passing on HIV to someone else.

‘Treatment has a significant role to play in ending the HIV epidemic. That’s because someone living with HIV and on effective treatment can’t pass the virus on, with or without a condom. We’re looking forward to what we hope is our most successful National HIV Testing Week yet.’

New research shows that, with only 16% of people currently meeting for sex, we have an unrivalled opportunity to end HIV transmission by 2030.
END_OF_DOCUMENT_TOKEN_TO_BE_REPLACED
Image
Image