We speak to our new ambassador Rosie, who braved the shave and inspired the Big Shave Challenge! 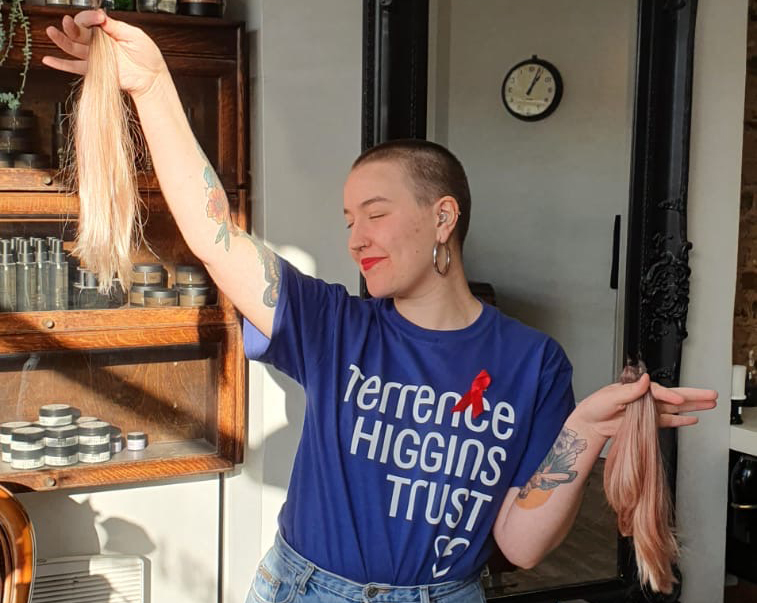 Rosie first fundraised for us just last year by taking on the fantastic and brave challenge of shaving her head. Since then so much has changed, and the Big Shave Challenge was born!

Read Rosie’s story here and how you can get involved.

How did you hear about us?

'I fundraised for Terrence Higgins Trust at work and I massively enjoyed it. I must admit, I did not know a lot about you when I first started calling on your behalf, but I spoke to a lot of people that have had personal experiences with HIV, and even a few that have lost friends and family members and it just made it so clear that the work you do is nothing short of life saving.'

What is your motivation to support us?

'Aside from having fundraised for you at work, I learnt about the support that you have given to the LGBTQ+ community over the years, when little was done to support us in the past.

'I myself have recently come out as gay, and feel very privileged to be living in a society that is mostly accepting. However, it was not always like this, and Terrence Higgins Trust has been there for those in the LGBTQ+ community and those that are HIV positive since 1982, at a time where identifying as LGBTQ+ and being HIV positive both had huge stigmas attached.

'Your Can’t Pass It On campaign aimed to do exactly this – end stigma associated with a positive diagnosis, which is massively important because when you are diagnosed, it’s not just the hospital trips and the medication, but this can also effect your love life and social life massively too.

'The fact that you are so aware of how HIV can impact every aspect of your life is refreshing, and when you consider that these values have been held by Terrence Higgins Trust since your creation in the 80s, it is clear that you're definitely a charity that was ahead of your time.'

Why did you choose to shave your head to raise money?

'I knew it would grab attention. My hair has never been shorter than just above my shoulders and I’m known for having had red, different shades of pink, and even blonde hair. I let it grow to around 14 inches and decided I was going for a more drastic change.

'Fuelled by my new shiny job as a fundraiser (which I love), I wanted to do something a bit more for a charity that I feel affiliated with, so I spoke to my good friend who is also a hairdresser and she volunteered her services for free, I then set up the fundraising page and off I went!'

How much did you raise?

'If you include the money that my boss at work donated after the fundraising deadline, I raised £606.75.'

What would be your top hair shaving tips?

'Wash your hair that day so it’s nice and fresh for your hairdresser, mate, mum, dad, yourself etc when it’s shaved.

'If your hair is long enough, separate it into small sections with hair ties, and cut from the bottom of the tie (the bit closest to your scalp), this makes shaving it MUCH easier.

'I felt amazing! Not only had I done something that I’ve wanted to do for a couple of years, but I raised a good amount for an amazing charity too!

'I have never had so many compliments having a shaved head, a friend of mine that came with me to the head shave even said he prefers it. He must have been envious of my drastic change because he left the salon with blue hair (unplanned, but fitting for Terrence Higgins Trust!)'

'Having a shaved head also means I can be really fun with it and dye it lots of different colours without worrying too much about damage, because I can just shave it and start all over again! But I must say, I shaved my head for World AIDS Day in December, so it was a bit chilly, so if you do decide to brave the shave in the colder months, get yourself some cool hats (hat hair not included).'

What would be your top tips for fundraising for this type of challenge?

'No matter how you get the word across, you must keep it in people’s newsfeeds and minds. From setting up my fundraising page, it was about four to six weeks before the head shave actually took place. This gave me plenty of time to spread the word and update people on how much I had raised so far!

'Setting a target is also super important. When I first set up the fundraising page, the target was set at £700 by default, but I changed it to £500 and exceeded it by over £100, so AIM HIGH!

'Shaving my head for Terrence Higgins Trust is honestly the best thing I have ever done. If you have ANY doubts whatsoever, just do what I did and spend five hours every day looking up ‘cute pixie haircuts’ and ‘buzzcut hairstyles’ (trust me, you will be sold).

'I also wanted to just say a massive thank you to every single one of my friends, family and work colleagues that sponsored me during this fundraiser – it really would not have been possible without you. Never before have I felt so supported and grateful of all of the amazing people that surround me. I love you all dearly – thank you for supporting such an amazing cause.'

Inspired by Rosie and want to support us? Sign up today to the Big Shave Challenge for your free digital welcome pack.

Or find out more about becoming a Volunteer Fundraising Ambassador.

How to have sex while managing the risk of COVID-19

Dr Michael Brady, Medical Director at Terrence Higgins Trust, shares how to have sex while managing the risk of COVID-19
END_OF_DOCUMENT_TOKEN_TO_BE_REPLACED
Image
Image