'Can't pass it on' posters vandalised, but we're more determined than ever to get the message out. 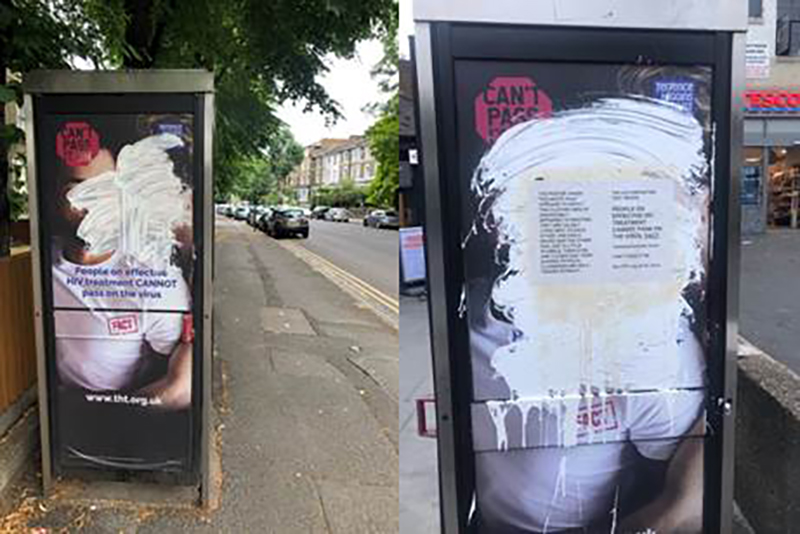 The powerful image of two men lying together and the message that people living with HIV and on effective treatment can’t pass it on has been popping up on billboards and phoneboxes up and down the country to tackle the stigma surrounding HIV.

But the campaign, by charity Terrence Higgins Trust, has been targeted by unknown vandals who are whiting out the image in what is thought to be homophobia-related vandalism.

That’s why the charity has taken to social media to ask supporters to offset the damage of this important message being covered up and Twitter users have been calling out the vandalism.

The poster campaign comes off the back of a nationwide survey commissioned by the charity which revealed that knowledge of HIV remains stuck in the 1980s. It found that just under one in five (19%) Brits are aware that people on effective HIV treatment can’t pass it on – which is the focus of the vandalised posters.

The charity’s YouGov survey also revealed almost half (48%) of Brits would feel uncomfortable kissing someone living with HIV – even though there is zero risk of transmission through kissing or other day-to-day contact. 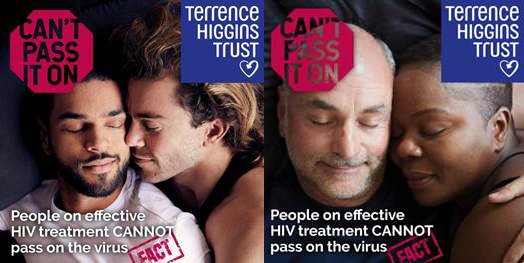 For the past 20 years, evidence has been building to show that the likelihood of passing on HIV is linked to the amount of virus in the blood, also known as viral load. Treatment is deemed effective when it reduces this to undetectable levels. This can take up to six months from starting treatment.

The landmark PARTNER and PARTNER 2 studies provide the medical evidence that people with an undetectable viral load definitively cannot pass on HIV.

Can’t Pass It On has been the focus of Terrence Higgins Trust’s messaging during Pride season, including at Pride in London and Black Pride earlier this month.

‘This vandalism is so sad to see. Whether our posters have been targeted because it features two men in an affectionate embrace or because it’s about HIV, we will not be silenced. In fact it makes us even more determined to get the message out there that people on effective HIV treatment can’t pass it on.

‘Despite this medical progress, public attitudes towards HIV are firmly stuck in the past. That’s exactly why it’s so important to remove the fear and misinformation about HIV by celebrating the fact that thanks to effective treatment people like Sadiq who is featured in our poster, are living normal and healthy lives and cannot pass the virus on.

‘We have been heartened to see supporters offsetting the damage caused to the posters by sharing information about our Can’t Pass It On campaign. If everyone knew the facts on HIV we could not only end HIV stigma, we could end new HIV transmissions.’

Our response to Matt Hancock's announcement that PrEP will be fully uncapped and available from April in England.
END_OF_DOCUMENT_TOKEN_TO_BE_REPLACED
Image
Image